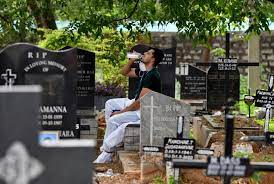 Braving COVID risks, Indian volunteers tend to the sick and the dead

Every day after he wraps up the online classes he teaches at a Bengaluru college, Akshay Mandlik puts on his mask, gloves and overalls and heads out to help bury the COVID dead.

The 37-year-old professor of social work is one of many citizen volunteers across India who have stepped up to help families affected by the country’s devastating second wave, often risking their own personal safety.

Mandlik helps grieving relatives find burial spaces, carry the dead and even dig graves when no gravedigger is available.

“I took some time to think about getting involved as I am not vaccinated, but the need of the hour was greater than my own fear,” Mandlik said.

India, the world’s biggest vaccine producer, has fully vaccinated just over 40.9 million people, or only 3.3% of its 1.35 billion population as of Wednesday.

Volunteers say they have been moved to act by desperate pleas for help on social media and in their local communities.

Brothers Murthaza Junaid and Muteeb Zoheb, both well-known motorcycle racers and entrepreneurs, are now volunteering as ambulance drivers in Bengaluru, responding to hundreds of calls every week.

Zoheb, 33, said he and his brother decided to volunteer a month ago after hearing accounts of families being overcharged by professional ambulance services.

With the epicentre of India’s second wave constantly shifting, Bengaluru’s COVID-19 death toll passed 10,000 on Tuesday and its daily number of new infections has overtaken those of Mumbai and New Delhi. More than a third of Bengaluru’s fatalities have occurred so far in May.

Informal groups of volunteers have sprung up, with the likes of IT professionals, investment bankers, estate agents and students working together to locate critical care beds, stocks of Remdesivir, oxygen concentrators or ambulances.

Azmat Mohammed, 44, said he had taken a sabbatical from his job in IT to help full-time, while law student Akshaya 22, said she was balancing classes with her COVID volunteering.

“I believe that if we do good, you get back good,” said Akshaya, who prefers to use only her first name.

“I attend classes and go to the cemetery for burials. I also spend time collaborating with other people to help with ambulances. It is a lot of multi-tasking.”

With the second wave spreading beyond the large cities, similar groups have formed in smaller towns and cities as well.

In Surat in the western state of Gujarat, volunteers at the Khan Trust and Ekta Foundation are working to cremate COVID-infected bodies in the region.

During a wave of deadly Hindu-Muslim riots in 2002, Surat experienced some of the worst violence, but the pandemic has diluted some of the residual hostility between communities, volunteers say.

Sahil Sheikh, in his 20s, said he and his friends have conducted the final rites for nearly 800 people in the past year, of all religions.