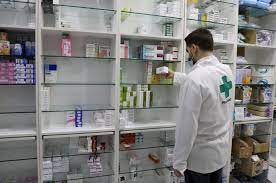 Bitter pill: Lebanon’s medical crisis set to get even worse

After a fall that broke her elbow and leg, Hasbini’s mother Sahar was rushed to hospital where surgeons wanted to insert six screws. But there was a shortage.

“It was a disaster, she was in a lot of pain,” Hasbini said.

Her mother was put on morphine and the hospital, which Hasbini did not want to name, found the screws a day later.

“Is it possible that a whole hospital doesn’t have even six screws in stock? What if someone has a car accident?”

The financial crisis that is gripping Lebanon, described by the World Bank as one of the deepest depressions in modern history, is taking its toll on the healthcare system

Hospitals are cutting down on elective surgeries to reserve what is left of anaesthetics and other medical supplies for emergency procedures.

“We are concerned of course because you know hospitals can’t stop operating, at the end of the day when the life of the patient is in danger we have to do something,” Firass Abiad, who runs Beirut’s Rafik Hariri University hospital, told Reuters.

“What is most worrying is that we don’t know until when this will continue, if you know you can plan but when you don’t there is a problem.”

The shortage is set to deepen as the government, which is politically paralysed, deeply indebted and struggling to raise funds from potential donors, warned in early April that money for subsidies would run out in about two months.

The country has been subsidising fuel, wheat, medicine and other basic goods since last year, which costs the state around $6 billion a year. The programme has drained reserves, which dipped from over $30 billion before the start of the crisis to around $15 billion in March. The Central Bank did not give an updated figure on reserves when asked by Reuters.

The bank said last week it would not dip into its mandatory reserves to pay around $1.3 billion it owes in medical supply costs, asking the government to find a solution to the shortage. Karim Gebara, who heads Lebanon’s Pharmaceutical Importers Assocation, says the situation is set to get even worse in June, with stocks completely depleted as suppliers abroad demand payment and cancel orders.

“In other words all the medicine that we have received in the past six months and (which has been) consumed by Lebanese patients is not paid for,” he said.

International firms, which sold the medicine to Lebanese importers based on their history of creditworthiness, can no longer wait after payments have been delayed for months.

Lebanon’s caretaker health minister Hamad Hasan said this week the central bank needed to maintain its commitment to supporting the medical sector. He said he had visited the bank asking for the release of funds to no avail.

The Central Bank did not respond to requests for comment.

Outside the hospitals, pharmacists say they haven’t been given their quotas in weeks and as pills for chronic conditions and over-the-counter medications are running out.

Diabetes, heart and blood pressure patients, who need medication daily, had been forced to rely on alternatives to their usual pills, but in recent weeks the situation has worsened badly, says Mazen Bsat, a Beirut pharmacy owner.

“Out of every ten patients we turn away maybe eight,” Bsat said, pointing to empty shelves behind him.

Sleiman Haroun, who heads Lebanon’s syndicate of private hospitals, says the situation will get even worse if Lebanon’s political deadlock continues.

Lebanon has been without a government, with the current one acting in a caretaker capacity, since shortly after the Aug. 4 chemical explosion that destroyed the port of Beirut and devastated downtown areas, killing hundreds.

Prime Minister-designate Saad al-Hariri has been at loggerheads with President Michel Aon for months over naming ministers, but only a new cabinet can enact reforms to unlock much needed foreign aid.

“There is a grave political problem that needs a solution,” Harmon said. “Without external support the medical sector cannot stand back up on its feet.”