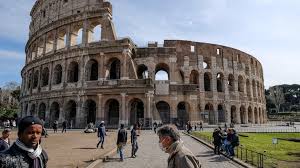 BBC News: People returning to UK from Italy must quarantine

Vatican City state and San Marino have been cut from the travel corridor list.

Italy, which is visited by large numbers of UK residents, was one of the last major countries in Europe on the safe list.

Travellers from the Greek island of Crete will no longer need to quarantine.

A rate of 20 cases per 100,000 is the threshold above which the government considers imposing quarantine conditions.

Last week, no countries were added to the quarantine list, amid a spike in UK cases.

Poland, Turkey and the Caribbean islands of Bonaire, St Eustatius and Saba were among the most recent places added to the quarantine list.

In Italy, it is mandatory to wear face coverings in indoor spaces, including shops, offices, public transport and in bars and restaurants when not seated at a table, though private homes are exempt.

Masks must also be worn in busy outdoor spaces.

The country recently announced compulsory testing for anyone arriving from the UK, Netherlands, Belgium and the Czech Republic.

Italians were subject to some of the strictest lockdown measures in the world when the country became the first in Europe to be overwhelmed by the coronavirus earlier in the year.

When the quarantine is applied to a destination, there is an immediate impact on bookings.
Only non-quarantine destinations are “in demand”, according to one airline insider.

The flip side is also true.

Last week, the UK government took the Greek island of Zakynthos off its quarantine list.

Tui scheduled a flight soon after and it sold out in days.

That said, passenger numbers overall are massively suppressed due to the resurgence of the virus and the tightening of travel restrictions.
No airline is expecting a surge in bookings for this half-term.

The government has promised that passengers will, by next month, be able to pay for privately-funded Covid tests to reduce the quarantine period by a week.

Ministers are also considering allowing passengers to test before they travel into the UK and that might mean that some people arriving from at risk countries don’t have to quarantine at all.

Winters are always tough for airlines. This one looks incredibly bleak and the prospect of testing to reduce the impact of quarantine is only a small glimmer of light.

Passengers arriving in the UK from at-risk countries could avoid having to quarantine under a number of options being considered by the government. Transport Secretary Grant Shapps told a travel conference the plan could involve private Covid testing or a period of self-isolation before departure.

The other option being considered by the government is a system whereby passengers would only have to self-isolate for about a week, instead of two weeks, if they were tested after that period and tested negative.

BBC News: London to move from Tier 1 to Tier 2 at weekend
BBC News: Coronavirus: Tougher restrictions for areas of England and Italy off safe travel list