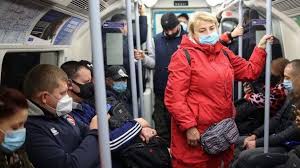 Coronavirus: Tougher restrictions for areas of England and Italy off safe travel list

More than half of England’s population will be living under the two highest coronavirus restrictions from this weekend. London, Essex, York and parts of Surrey, Derbyshire and Cumbria are facing tougher measures from Saturday after being moved up to Tier 2. Under this “high” alert level, there is a ban on households mixing indoors, including in pubs and restaurants. Here’s a reminder of what the different alert levels mean.

Greater Manchester ‘fighting back’ against Tier 3

The mayor of Greater Manchester says local leaders are “unanimously opposed” to the introduction of the tightest coronavirus restrictions. Andy Burnham said the measures were “flawed and unfair” and they would “stand firm” against government plans to put the region into Tier 3. The restrictions involve pub closures and a ban on households mixing indoors, in private gardens and in most outdoor venues. Meanwhile Liverpool, which has already been put in the top tier, is considering a two-week half-term break for schools.

The Welsh Government is likely to announce a circuit-breaker – a short, limited lockdown – in the next few days, the BBC has been told. However, it is not yet clear when the announcement will be made, for how long the tighter restrictions would last, or what sectors would close. Meanwhile, the UK government’s Welsh Secretary, Simon Hart, has criticised Wales’ plan for travel restrictions on people visiting the country from UK Covid hotspots.

Travellers returning in the UK from Italy will have to self-isolate for two weeks from Sunday, the government has announced. Italy recorded its highest daily tally of coronavirus cases on Thursday, with 8,804 people testing positive. However, from Sunday people living in England, Wales and Northern Ireland arriving from the Greek island of Crete will no longer have to quarantine. People coming to Scotland from mainland Greece and its islands – apart from Mykonos – will not be required to self-isolate.

First royal visit in seven months for the Queen

The Queen has made her first royal visit since the beginning of lockdown with a trip to the Defence Science and Technology Laboratory at Porton Down in Wiltshire. Special safety measures were put in place to protect the monarch, 94, who was joined by her grandson, the Duke of Cambridge. The Queen arrived separately to Prince William and those she had close contact with had been tested for coronavirus beforehand.