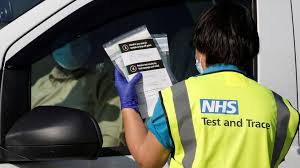 Boris Johnson says he shares people’s frustrations at the turnaround times for results in England.

At Wednesday’s coronavirus briefing he said “I share people’s frustrations” at the turnaround times for results.

The government’s chief scientific adviser, Sir Patrick Vallance, said it was “very clear there’s room for improvement” in the system.

It comes as figures showed just 15.1% of people who were tested received their result within 24 hours.

The figures for the week ending 14 October are down from 32.8% in the previous week.
It is the lowest weekly percentage since NHS Test and Trace began.

Mr Johnson previously pledged that all tests would be processed within 24 hours – unless there were issues with postal tests – by the end of June.

The figures also show a drop to 59.6% in the proportion of close contacts reached of people who tested positive.

This is also the lowest weekly percentage since the system began and is down from 63% in the previous week.

Speaking at a coronavirus press conference at Downing Street, Mr Johnson said: “I share people’s frustrations and I understand totally why we do need to see faster turnaround times and we need to improve it.

“We need to make sure that people who do get a positive test self-isolate – that’s absolutely crucial if this thing is going to work in the way that it can.”