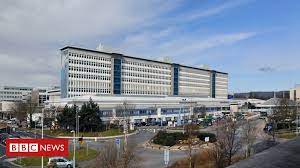 Large numbers of patients and staff sickness have created an “incredibly challenging” situation at Wales’ hospitals, a health official has said. Cardiff and Vale health board appealed for medics to help University Hospital of Wales’ critical care department on Boxing Day and received 33 offers.Welsh Government data shows it ran out of intensive care beds on 20 December.Public Health Wales’ Dr Giri Shankar said the health system was under enormous and unprecedented pressure.He told BBC Radio Wales that a “significant proportion” of the workforce are sick and unwell. Just before Christmas, the sickness rates were just around 10-12%, he said, adding: “That’s a large number of unavailable workforce. “Therefore, as you saw yesterday and the day before, health boards making plea for whatever help they can get from various sources including medical students, ex-health care professionals, and so on,” he said.”So, it is an incredibly challenging situation and not just in Cardiff and Wales but across all our health boards.”The health board tweeted a plea at about 21:15 GMT on Boxing Day saying its critical care department was “urgently looking for assistance from medical students or other staff groups who have previously supported with proning patients”.Proning involves turning patients on to their front to increase the oxygen supply to the lungs.On Sunday morning it thanked people for responding to its request and said there was now “no need to call us”.The Welsh Government say by mid-morning on Sunday the unit had received 33 officers of assistance locally and from other parts of Wales. It said a “small number” of people who have worked for the health board before will have their offer taken up, while the details of others will be kept on file should they be required later.On Monday, Public Health Wales reported a further 15 people had died after contracting coronavirus in Wales, taking the total to 3,383.Hospitals in the south of England have said they have seen a “real rise in pressure” as the number of Covid patients needing treatment increases.’Extreme pressure’Speaking to BBC Radio 5Live, Dr Andrew Lansdown, a consultant endocrinologist at University Hospital of Wales, said the influx of Covid-19 patients had become “relentless”.”We really have felt stretched to the limit,” he said, adding the number of patients with the virus coming through the hospital was “massive”.”I think it’s not just the new variant, which seems to be spreading faster. You’ve also got the usual winter pressures at the hospital, as well as staff themselves who are ill, self-isolating.”He said the past few weeks had seen hospitals in Wales coming under “extreme pressure”.Dr Lansdown said the response to the appeal for help on social media had been “overwhelming” but he feared that it would not be long before other hospitals across Wales and the rest of the UK would be facing similar pressures.”During the first wave there was a large resource of energy in staff, whereas now in the second wave it’s quite different,” he said. “We can see a lot of staff fatigue. It’s a fatigue that is obviously physical, but it very much is emotional as well.”We’re seeing staff members themselves becoming unwell, some have sadly died during the pandemic. And then trying to balance that with looking after patients as well.”He added: “I think it’s a picture right across Wales.” #manchesterunited#manchestercity#HealthForAll#HealthBroadcastingService#GlobalHealth#Covid-19#nativity#Health#moisescaicedo#ukcoronavirus#HealthBroadcastingServiceInPublicHealthPartnership#formula1abudhabi#lakers#sheffieldunitedvsmanchesterunited#stockmarket#onlinecasino#dollyparton#bankholiday#vaccine#europeanunion#chrissyteigen#automobilerepair#lasvegasraiders#michaelmartin#hilariabaldwin#furlough#nikeairjordaniv#brisbaneroarfc#dollyparton#mikepence #denvernuggets#liverpoolfcandcrystalpalacefc#donaldtrump#goodmorningbritain#losangeleslakers #santaclaus#michaelschumacher #georgemichael#popefrancis#mutation#sikhshttps://www.bbc.co.uk/news/uk-wales-55465231