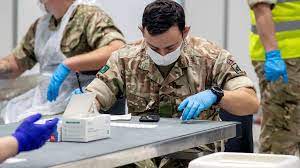 Members of the armed forces are to give remote support to secondary schools and colleges in England setting up mass Covid testing as the new term begins.The Ministry of Defence said 1,500 military personnel will hold webinars and give phone support to school staff.But teaching unions say schools have not been given enough time to make plans.The head of one academy trust that runs 50 schools, says the government should delay the start of term.The majority of secondary school pupils in England are due to begin the term – which begins for most on 4 January – studying remotely, to give head teachers time to implement a coronavirus testing programme for students and staff. Primary schools students will return as normal during the same week.The Ministry of Defence said the majority of the 1,500 personnel will form local response teams, providing support and phone advice to institutions needing guidance on the testing process and set-up of testing facilities.It said support would be done “predominantly through webinars and individual meetings”, but teams would also be on standby to provide in-person support at short notice.Students will swab themselves in the vast majority of cases, under the supervision of a school staff member or volunteer who has been trained for the role, and teachers are not expected to take a role in the testing process.General secretary of the ASCL head teachers’ union Geoff Barton welcomed government plans to provide military support but he said that for 3,500 secondary schools “1500 troops doing webinars probably isn’t the government response we were looking for”.He told BBC Breakfast: “Those people that are calling for a delay to young people coming back (to school) are doing it on the principle that we should get this testing right and we should listen to what the scientists are saying.”Steve Chalke, founder of Oasis, one of the largest multi-academy trusts in England, said schools should remain closed for “a week or two” after the Christmas holidays to enable the effective rollout of testing.He told BBC Radio 4’s Today programme: “We would ask government to pause, to come up with a clear strategy for the continuity of education. We think that means a short delay to think things through.”Defence Secretary Ben Wallace said the armed forces would share their “considerable experience” of using rapid mass testing kits – known as lateral flow tests – that do not require lengthy lab work to provide a result.The military has previously helped organise mass testing in Liverpool and more recently in Kent to clear the backlog of lorries caused by France shutting its UK border.Education Secretary Gavin Williamson said: “It is a true cross-government effort to make sure secondary schools and colleges have the support, guidance, materials and funding they need to offer rapid testing to their staff and students from the start of term.”How are the UK nations returning to school?England: Secondary school pupils in exam years will return at the start of term while others begin their learning online. Face-to-face learning is expected to resume for everyone by 11 January. Primary schools will return as normalScotland: Schools will start term on 11 January with learning taking place online until at least 18 January.Wales: Term will start with online learning, but the majority of pupils are expected to resume face-to-face lessons by 11 January. A full return to the classroom is expected to be complete by 18 JanuaryNorthern Ireland: All schools will initially reopen for face-to-face teaching at the start of term, but years 8 to 10 will move to remote learning from 25 January for at least two weeksSchools in all the UK nations are remaining open for vulnerable children. England, Wales and Scotland have also committed to maintain face-to-face teaching for children of key workers.Preliminary research by the London School of Hygiene and Tropical Medicine has suggested schools and universities might need to close on top of existing tier four restrictions to bring the new fast-spreading coronavirus variant under control.On Monday, Dr Patrick Roach, general secretary of the NASUWT, called on the education secretary to allow schools to move to remote learning for all pupils – except those deemed to be vulnerable or the children of key workers – in the highest tier areas.And Mary Bousted and Kevin Courtney, the joint general secretaries of the National Education Union, said schools and colleges should remain closed for at least the first two weeks of January, except for vulnerable children and the children of key workers.However, senior Conservative MP Robert Halfon, who chairs the Commons Education Committee, said keeping children in schools and learning must be the government’s “priority”.He said: “What needs to happen is volunteers – perhaps the armed forces, perhaps mobile units outside schools or in school playgrounds – making sure pupils and teaching staff are tested and also rolling out vaccinations as a priority for all those in schools.”#manchesterunited#manchestercity#HealthForAll#HealthBroadcastingService#GlobalHealth#Covid-19#nativity#Health#moisescaicedo#ukcoronavirus#HealthBroadcastingServiceInPublicHealthPartnership#formula1abudhabi#lakers#sheffieldunitedvsmanchesterunited#stockmarket#onlinecasino#dollyparton#bankholiday#vaccine#europeanunion#chrissyteigen#automobilerepair#lasvegasraiders#michaelmartin#hilariabaldwin#furlough#nikeairjordaniv#brisbaneroarfc#dollyparton#mikepence #denvernuggets#liverpoolfcandcrystalpalacefc#donaldtrump#goodmorningbritain#losangeleslakers #santaclaus#michaelschumacher #georgemichael#popefrancis#mutation#sikhshttps://www.bbc.co.uk/news/uk-55471095