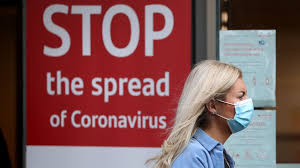 West Yorkshire will be placed under strictest level of Covid restrictions from Monday.

This will mean there can be no mixing of households indoors or outdoors, including in private gardens.

The area – home to an estimated 2.3 million people – includes the cities of Leeds and Bradford.

Bradford currently has the highest rates in the county, with 483.5 cases per 100,000 of the population.

“Today, with great reluctance, we have accepted that West Yorkshire will now move into Tier Three (Very High) restrictions, as of 00.01am on Monday 2nd November,” said a statement from the Leaders of West Yorkshire Councils.
The government has promised a financial package of more than £59.3m for the area “additional to the existing business grant arrangements previously announced by the Chancellor for tier two”.

West Yorkshire residents are advised to avoid travelling outside the area, unless for essential journeys, such as work or caring responsibilities.

Julian Hartley, chief executive of Leeds Teaching Hospitals NHS Trust, said Leeds hospitals had “exceeded the peak position we were in earlier this year in April”.

Hospitals in the city are currently treating 268 patients with Covid – up from 158 last week.

Victoria Eaton, Director of Public Health for Leeds said the rate of infection in Leeds was “still growing in Leeds though not as steeply as the increase in other areas both in West Yorkshire and in Yorkshire and Humber”.

She said the latest daily rate is 416.7 per 100,000. The rate of infection is now highest among 30-44 year olds but “most worryingly we are seeing increases among our over 65 age group, which as we know is an early warning of future hospital admissions”.

The neighbouring areas of South Yorkshire, Greater Manchester and Lancashire are already under tier three restrictions.