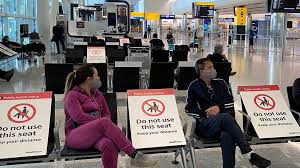 The aim is to help people travelling to destinations where a negative result is required on arrival.

Passengers flying from Heathrow to Hong Kong and Italy on Tuesday will be the first to have the option of paying for a rapid Covid test before checking in.

The test will cost £80 and the result is guaranteed within an hour.

The aim is to help people travelling to destinations where proof of a negative result is required on arrival.

A growing number of countries have classified the UK as being “at risk”, meaning travellers from the UK face more restrictions.

The authorities in Hong Kong now require people to show they have a negative test result, taken within 72 hours of a flight from London.

The rapid saliva swab, which is now available at Heathrow Terminals 2 and 5, is known as a Lamp (Loop-mediated Isothermal Amplification) test.

Tim Alderslade, chief executive of the aviation trade body Airlines UK, said he would like the cost of the test to be lower.

“For business passengers £80 is probably quite competitive but we’ve certainly said to the government in terms of introducing a test on arrival in the UK anything from £50-£60 would be better,” he said.

A Lamp test is quicker than the PCR test, which is widely used in the NHS, because the sample does not need to be sent to a laboratory.

Collinson, the company behind the initiative at Heathrow, admitted that the Lamp test is “slightly less sensitive” than the PCR test.

However, the Lamp test is considered to be much better than another rapid option – the antigen test.

Collinson’s chief executive David Evans told the BBC that “health screening” was quickly becoming another stage of the airport experience.

He said passengers would only have to turn up at the airport an hour earlier. And he maintained testing would help give people confidence to travel, because flights would be “Covid-secure”.

Collinson, which partners with Swissport, hopes testing will help open up routes between the UK and other countries.

People arriving in Italy from the UK must now either prove they had a negative coronavirus test before departure, or take a test on arrival at an airport in Italy.

However, the type of test offered at Heathrow is not sufficient for people travelling to some destinations, such as Greece, Cyprus, the Bahamas and Bermuda.

All those places currently require proof of a negative PCR test, which requires analysis in a laboratory.

The hope is that more countries will change their rules and allow for other types of test, which could be administered on the spot at Heathrow.
It is important to note that the new testing facility at Heathrow is not for passengers flying into the airport.

That means it will not have any immediate impact on the UK’s two-week travel quarantine for people arriving from “at risk” countries.

Collinson set up a separate testing facility in arrivals at Heathrow over the summer. However, that facility has not been used by passengers, because the government has not given its backing to testing people on arrival.

Ministers have promised that next month, they will give their formal approval to the idea of people paying for a test after a week of quarantine, to avoid the full two weeks.

On Monday, Transport Secretary Grant Shapps confirmed the government was in talks with the US Department of Homeland Security about a different type of system, possibly involving “multiple tests”.

The government is looking at another system, under which people could take one test two or three days before they fly into the UK, and then another test when they arrive.

That could make it possible for someone arriving in the UK from an “at risk” country to avoid quarantine altogether.

However, Mr Shapps said he could not say when that type of system would be up and running, because it required international co-operation.