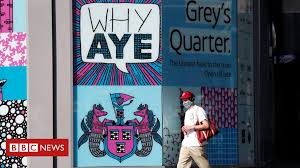 Measures to stop households mixing and early pub closures will come into effect from midnight. Almost two million people in north-east England will see more restrictions following a rise in coronavirus cases. The temporary measures include restrictions on households mixing and pubs closing earlier at night. The Northumberland, Newcastle, Sunderland, North and South Tyneside, Gateshead and County Durham council areas will be affected from midnight. Health Secretary Matt Hancock said there were “concerning rates of infection in the North East”. Under the new restrictions Mr Hancock said residents would not mix with people outside their households and support bubbles. Restaurants will only be able to offer table service and there will be curfews between 22:00 BST and 05:00 for restaurants, bars and pubs. The North East has seen a resurgence of coronavirus in recent weeks and on Monday seven councils called for new restrictions. Newcastle City Council leader Nick Forbes said the temporary measures were aimed at “preventing a damaging full lockdown”. “The evidence we’ve found from local testing is that it’s spreading in three main areas – in pubs, in people’s homes and in grassroots sports,” he said. SOURCE: BBC