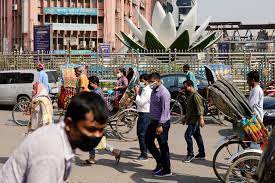 DHAKA (Reuters) -Bangladesh has detected its first case of a highly infectious coronavirus variant first identified in India, the country’s health directorate said on Saturday, prompting the government to keep its border sealed for another two weeks.

Six cases of the Indian variant had been detected in Bangladesh, Nasima Sultana, additional director general of the health directorate, told reporters.

“Two cases are confirmed to be of the Indian variant, and the others are quite close to it,” Sultana said, adding that they all recently returned from neighbouring India and were in isolation.

“The Indian variant is highly contagious and people must be cautious and strictly follow health guidelines such as wearing masks, maintaining physical distancing and washing hands,” she said.

The variant, named B.1.617, has reached at least 17 countries, from Britain and Iran to Switzerland, sparking global concern.

The World Health Organization has described it as a “variant of interest”, suggesting it may have mutations that would make the virus more transmissible, cause more severe disease or evade vaccine immunity.

India, battling a devastating second wave of the coronavirus that has overwhelmed hospitals, morgues and crematoriums, on Saturday reported its highest ever single-day COVID-19 death toll.

Late in April, Bangladesh sealed its border with India for 14 days, though trade continues. The government on Saturday decided to extend the border closure for another 14 days after the variant was detected, a foreign ministry official said.

Air travel has been suspended since April 14, when Bangladesh imposed a strict lockdown for a week. Since then, a loose lockdown has been in place to May 16.

Bangladesh’s second wave peaked around a month ago. Since then, daily infections have been declining, with 1,285 new cases reported on Saturday as well as 45 fatalities.