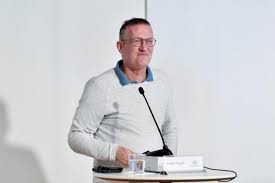 STOCKHOLM, March 9 (Reuters) – The man who became the face of Sweden’s no-lockdown pandemic policy, Anders Tegnell, is stepping down as chief epidemiologist to take up a role at the World Health Organization (WHO), the Swedish Health Agency said on Wednesday. Tegnell, whose almost daily news conferences had Swedes glued to their screens for much of the pandemic, will become a senior expert at a WHO group tasked with coordinating the COVID vaccine response between health and vaccine organisations. Tegnell proved a polarizing figure at the Health Agency. He was forced to have police protection after he and his family received death threats but his face has also featured on T-shirts with the slogan “In Tegnell we trust.” Some people even got Tegnell tatoos.More than 17,000 people have died in Sweden from or with COVID-19, many times more per capita than in neighbouring Nordic countries but also less than in many other European countries that also opted for lockdowns.When much of the world scrambled to lock down as the coronavirus spread like wildfire in winter and spring 2020, Sweden stood out by opting for mild and voluntary measures. It kept schools open while most restaurants, bars and other businesses never shut. Mask were never recommended.Tegnell, 65, argued that lockdowns were not sustainable and that voluntary measures could achieve the same results without damaging the trust between authorities and the public. However, as deaths soon exceeded those in other Scandinavian countries, his critics argued that the lack of more intrusive measures actually eroded public trust, while also increasing levels of human suffering. A commission, appointed by the government after pressure from the opposition, concluded this month that not enough had been done to halt the spread of the virus in the early stages of the pandemic but personal liberties had been respected and that the voluntary strategy had been broadly right.