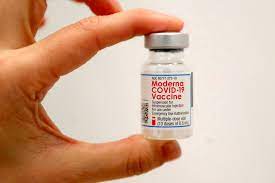 NEW YORK (Reuters) – Antibody levels are a good predictor for how effective Moderna Inc’s COVID-19 vaccine is, according to a new study released on Tuesday, a finding which could help speed up future clinical trials for vaccines against the disease.

Regulators currently rely on large placebo-controlled studies to determine if a vaccine works, but the study here, conducted by scientists from the Fred Hutchinson Cancer Research Center, the National Institute of Allergy and Infectious Diseases, Moderna and elsewhere, showed that measuring the antibody levels in vaccine recipients could also determine effectiveness.

The study, which has not yet been peer-reviewed, found that the Moderna vaccine was more effective in vaccine recipients with high levels of antibodies. These recipients also reported a lower rate of breakthrough infections after being vaccinated.

The study was conducted using data from Moderna’s 30,000-participant clinical trial, which started last year and was the basis for the vaccine’s authorization.

Finding a surrogate measure of efficacy should speed regulators’ decisions on vaccine approval even without large placebo-controlled studies, which could be impracticable to carry out if vaccines become widely available, said Peter Gilbert, a researcher at Fred Hutchinson and an author of the study.

Combined with data about the Pfizer/BioNTech and AstraZeneca vaccines, Gilbert said there has been a “consistent accumulation of evidence” showing that antibodies can be used as an alternate marker for vaccine efficacy.