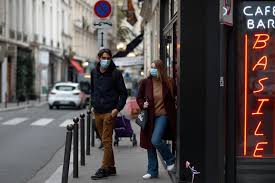 Solene Tissot, a 19-year-old student in Paris, will obey the curfew imposed to fight COVID-19, but she has one request for her country’s leaders: don’t blame young people for the second wave of the virus.

“There’s been this kind of assigning guilt to young people,” she said on Friday, hours before the new curfew was to come into force in Paris and major French cities. “I reject that.”

After a lull over the summer, the rates of transmission of coronavirus are going up in many parts of Europe and officials have identified social interactions between young people as a source of the resurgence.

German Chancellor Angela Merkel said on Wednesday: “We must call especially on young people to do without a few parties now.”

About 25% of the virus clusters under investigation in France are in educational establishments, the public health agency said.

But students who spoke to Reuters in the French capital on Friday said that they and their peers had been sticking to social distancing guidelines.

The virus was being spread, they said, because of other factors, including a lack of preparedness on the part of the government and people mixing in workplaces. Blaming young peoples’ parties, they said, was too simplistic.

“We get blamed because it’s very easy to make us into a scapegoat,” said Zoe, a 21-year-old student at the Sorbonne University in Paris who declined to give her family name.

She said authorities should do a better job of managing social distancing inside universities, before pointing the figure at youngsters’ parties.

Nicolas Litaudon, a 19-year-old studying at Sciences-Po university, said instead of blaming young people, he said, France’s rulers need to look at themselves.

“Did the government do enough to anticipate, to plan?” he asked. “You should not moralise about this, by trying to blame one part of the population,” he said.