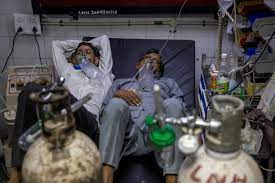 Why India is facing an oxygen crisis as COVID cases mount

By air, by train and by road, India is scrambling to move large quantities of medical oxygen to hospitals in its capital New Delhi and other areas hit hard by a record surge of COVID-19.

ARE HOSPITALS RUNNING OUT OF OXYGEN?

The main problem is that medical oxygen is not reaching hospital beds in time. This delay is a product of where production units are located, a stretched distribution network, and what critics have said is bad planning.

With COVID-19 cases also swamping its neighbouring states like Haryana and Uttar Pradesh, oxygen facilities there are over-stretched attempting to meet local demand.

To fulfil Delhi’s current needs, additional medical oxygen now has to be trucked in from industrial zones in eastern India.

WHY ARE OXYGEN DELIVERIES GETTING DELAYED?

The facilities from where Delhi will now receive oxygen are spread across seven states, some more than 1,000 km (625 miles)away, according to a court document.

Given the hazardous nature of the substance, all liquid oxygen must be transported in a limited number of specialised tankers, requiring advance planning to ensure deliveries are made on time, a gas industry source told Reuters.

In recent days, as a scramble for oxygen among states worsened, local officials in some regions disrupted movement of tankers in a bid to keep supplies for themselves.

In part due to such blockades, Delhi only received about 177 tonnes of oxygen on Wednesday against its allocation of 378 tonnes, an official said.

But the industry source said that Delhi had also dragged its feet on planning ahead, without factoring in the time it takes to move oxygen cross-country by road.

“This problem wouldn’t have happened if they had acted 2-3 weeks ago,” the source said.

Delhi’s government did not respond to questions about the planning.

DOES INDIA HAVE ENOUGH OXYGEN?

India has a daily production capacity of at least 7,100 tonnes of oxygen, including for industrial use, which appears to be enough to meet current demand.

This week, the government allocated 6,822 tonnes of liquid oxygen per day to 20 of the country’s worst-affected states, compared to their combined demand of 6,785 tonnes, Prime Minister Narendra Modi’s office said on Thursday.

India’s total medical oxygen demand was just 3,842 tonnes as of April 12, as the surge in cases really took hold.

States are typically allocated supplies by an inter-ministerial group of bureaucrats mandated to monitor and facilitate the flow of essential medical kit during the pandemic.

Modi’s office has noted that the availability of liquid medical oxygen had increased by about 3,300 tonnes in the past few days, with steel plants and other industrial units diverting their production.

WHAT IS INDIA DOING TO SOLVE THE CRISIS?

The federal government has activated the Indian railways to move multiple tankers from refilling plants to where it is most needed.

Working with industrial gas major Linde India (LIND.NS) and others, the government is also using the Air Force’s cargo planes to fly empty tankers to production hubs. Refilled oxygen tankers will then move back by road.

The government has issued orders to convert argon and nitrogen tankers into oxygen ones.

But as some experts predict a trebling of daily infections in a few weeks, India will have to dramatically ramp up both oxygen production and distribution systems.