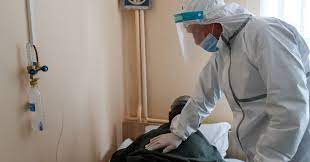 JERUSALEM, Sept 12 (Reuters) – The World Health Organisation expects a rise in COVID-19 in Ukraine to peak in October, possibly bringing hospitals close to their capacity threshold, WHO’s director-general Tedros Adhanom Ghebreyesus said on Monday.”We are now seeing an increase in cases of COVID-19 in Ukraine. We project that transmission could peak in early October and hospitals could approach their capacity threshold,” Ghebreyesus told WHO’S Regional Committee for Europe conference in Tel Aviv.”Oxygen shortages are predicted because major supply sources are in occupied parts of the country,” he said.Oxygen is essential for patients with a range of conditions, including COVID-19 and those with other critical illnesses stemming from complications of pregnancy, childbirth, sepsis, injuries and trauma.Russia’s February invasion of Ukraine has greatly impacted healthcare, with the WHO confirming more than 500 attacks on health infrastructure there, resulting in some 100 deaths. Ghebreyesus also said that the war could increase polio spread.”We are also deeply concerned about the potential for the international spread of polio due to the gaps in immunization coverage and mass population movement linked to the war,” he said.Ukraine has low vaccination coverage for both COVID and polio, an infectious disease mainly affecting children that can cause paralysis and kill in rare cases. Two cases of polio were reported in Ukraine in 2021.This year, Israel, Britain and the U.S have all reported polio transmission in major cities, raising concerns about the infection spreading more widely.