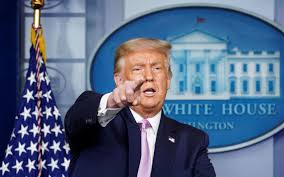 The Trump administration will unveil eight new measures on Wednesday for U.S. schools to follow as they reopen to increase protection against the coronavirus pandemic, White House adviser Kellyanne Conway said. “We want them (schools) to open soon and safely, and we’re coming up with eight measures or so on how to do that, which will be announced today,” Conway said in an interview with Fox News Channel. Later on Wednesday, Trump held a schools event where a small group of parents, teachers and assorted other individuals called for the reopening of schools, though the administration did not unveil particular steps. Trump has scheduled a news conference at 5:30 p.m. (2130 GMT), where he will be joined by members of his coronavirus task force, including White House adviser Scott Atlas, who is a forceful advocate of reopening schools. Trump has repeatedly pushed for schools to reopen, saying there are low risks to young people from the virus, even as teachers and public health experts have raised alarms about whether it could be done safely. But, despite Trump’s efforts, most of the country’s largest school districts have said they would start the school year with online classes, as states across the country have battled a spike in cases over the summer. “Virtual (education) is not as good as being there. Virtual is just not the same thing,” Trump said at the White House event. He also said he thought that students should return to the classroom every weekday. Opinion polls have found that support for full-time, in-person schooling has dropped as the pandemic has dragged on, though Republicans are significantly more likely to back students’ return to classrooms full-time in the fall than Democrats are.