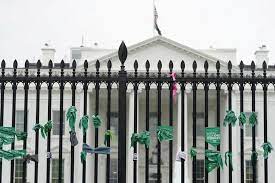 July 29 (Reuters) – The White House will host the inaugural meeting of pro bono attorneys and activists who defend abortion rights on Friday, in the wake of the U.S. Supreme Court’s overturning of Roe v Wade last month.President Joe Biden, a Democrat, has been under pressure from his own party to take action after the landmark decision last month that upended roughly 50 years of protections for women’s reproductive rights.The meeting will include Attorney General Merrick Garland, second gentleman Doug Emhoff, who is a lawyer, White House counsel Stuart Delery, Associate Attorney General Vanita Gupta, and attorneys, bar associations and public interest organizations from around the country, the White House said.Topics of discussion will include how to help women living in states where abortion is banned travel to states where it is permitted and ensure they are not prosecuted for seeking abortions, the White House said.In June, Biden condemned the court’s ruling and proposed that U.S. senators remove a legislative roadblock by temporarily lifting the Senate “filibuster” to restore abortion rights. The suggestion was shot down by aides to key Democratic Senators Kyrsten Sinema and Joe Manchin, whose support would be crucial in the evenly divided Senate.Biden signed an executive order earlier this month that set the stage for Friday’s meeting. He also asked the Health and Human Services Department to take action to protect and expand access to medication abortion approved by the Food and Drug Administration, and to contraception and family planning services.

If you are high risk, do not wait for updated COVID vaccines, experts say
‘Living with COVID’: Where the pandemic could go next