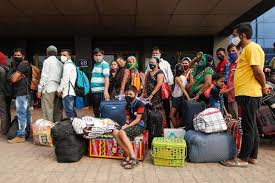 India reported a record daily tally of 168,912 COVID-19 infections on Monday, the world’s highest, while worries grew over a further spike, as hundreds of thousands of devotees gathered for a ritual bath in the Ganges river.

India now accounts for one in every six daily infections worldwide. Monday’s new cases carried it past Brazil, for an overall tally of 13.53 million, data compiled by Reuters shows, placing it second after the United States, with 31.2 million.

Thailand on Monday reported 985 new COVID-19 cases, a record daily jump for a second day in a row, as the country deals with a third wave of infections and a highly contagious variant.

Since the latest outbreak began at the start of April, 4,641 new domestic cases have been added in less than two weeks, bringing the total since last year to 33,610 cases and 97 deaths.

The spike comes ahead of the major national Songkran holidays, known for big street water fights that authorities have now banned for a second year due to the pandemic.

Available data shows Chinese vaccines lag behind others including Pfizer and Moderna in terms of efficacy, but require less stringent temperature controls during storage.

Giving people doses of different vaccines is one way to improve vaccines that “don’t have very high rates of protection”, Gao Fu, the director of the Chinese Centers for Disease Control and Prevention, said on Saturday, without specifying whether he was referring to foreign or domestic vaccines.

Australia has abandoned a goal to vaccinate nearly all of its 26 million population by the end of 2021 following advice that people under the age of 50 take Pfizer’s vaccine rather than AstraZeneca’s shot.

Australia, which had banked on the AstraZeneca vaccine for the majority of its shots, had no plans to set any new targets for completing its vaccination programme, Prime Minister Scott Morrison said.

Authorities changed their recommendation on Thursday, after European regulators reiterated the possibility of links between the AstraZeneca shot and reports of rare cases of blood clots.

People queued up outside retailers across England on Monday to release their pent-up shopping fever and some grabbed a midnight pint or even an early haircut as England’s shops, pubs, gyms and hairdressers reopened after three months of lockdown.

After imposing the most onerous restrictions in Britain’s peacetime history, Prime Minister Boris Johnson said the reopening was a “major step” towards freedom but urged people to behave responsibly as the coronavirus was still a threat.

Hundreds of thousands of businesses have been closed since early January when England entered a third lockdown to stem surging infections.