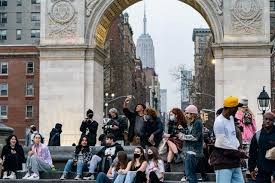 (Reuters) -Here’s what you need to know about the coronavirus right now:

India began vaccinating tens of thousands of people above the age of 45 on Thursday in its biggest push yet against a surging coronavirus that has hit the highest daily count since early October, officials said.

The world’s second most populous country aims to immunise 400 million people after expanding the programme, which had been restricted to the over-60s and people with serious health conditions, said a government official.

Anxious people lined up early at New Delhi’s Max hospital to get shots of the Oxford-AstraZeneca vaccine produced by the Serum Institute of India, the world’s biggest maker of vaccines.

Macron orders lockdown across all of France

President Emmanuel Macron on Wednesday ordered France into its third national lockdown and said schools would close for three weeks as he sought to push back a third wave of infections that threatens to overwhelm hospitals.

With the death toll nearing 100,000, intensive care units in the hardest-hit regions at breaking point and a slower-than-planned vaccine rollout, Macron was forced to abandon his goal of keeping the country open to protect the economy.

“We will lose control if we do not move now,” the president said in a televised address to the nation.

Poles rushed to sign up for COVID-19 vaccinations on Thursday after the government unexpectedly opened registrations for people aged over 40 overnight, in a sudden shift that led to so many applications that an online system crashed.

Over 2 million Poles have so far received both shots of a vaccine, but the prime minister’s top aide, who has been put in charge of the vaccination programme, said slower rates of registration among older Poles meant the government had decided to widen access.

The nation of 38 million people is in the grip of a damaging third wave of the pandemic, which has pushed its health service to its limits.Japan announces emergency measures in Osaka area

Japan’s government said on Thursday it would impose emergency measures, such as shorter business hours and asking people to work from home and refrain from activities like karaoke, in the western region of Osaka to halt a rebound in COVID-19 cases.

Osaka governor Hirofumi Yoshimura said Olympic torch events in the prefecture’s main city should be cancelled, a day after he raised the alarm about an emerging fourth wave of infections.

New infections in Osaka have exceeded those of the much larger metropolis of Tokyo in recent days.

Australia ended a lockdown of its third-biggest city Brisbane on Thursday, just in time for Easter holidays, as only one new locally transmitted case in Queensland state eased fears of a widespread outbreak.

Video and photos on social media showed people wearing masks checking in at cafes and restaurants for lunch or having beer at bars as Brisbane emerged from its three-day snap lockdown at noon local time.

Residents are, however, still required to wear masks in public and some social distancing restrictions will remain in place.