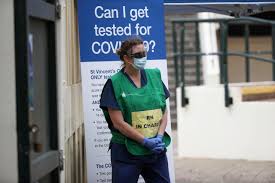 SYDNEY (Reuters) – Australian hospital workers on the coronavirus frontline say they daily receive letters of thanks, some people even bring them pizzas, but what they really need is proper respiratory face masks to replace faulty and homemade face shields.

While doctors and nurses in some hospitals struggle to obtain respiratory N95 face masks, Australians walking the streets can be seen wearing them.

“Every day we get a lot of thank you letters, some people bring pizza for us etc,” one senior emergency doctor told Reuters. “But I just want to go there and say ‘Hey, we’re not hungry. We need masks’”.

“If you go into the community you see on the faces of a lot of people the N95 masks and not enough in the hospital,” said the emergency doctor in the state of New South Wales (NSW), which has nearly half of the country’s more than 5,700 cases and has recorded the most deaths as of Monday.

Emergency doctors and healthcare workers union representatives say they have been assured by authorities there are stockpiles of personal protective equipment (PPE) and efforts to produce more are ramping up.

But staff in some stretched hospitals in NSW are facing tight restrictions on the use of higher specification N95 face masks and are relying on face shields made from plastic and rubber bands from hardware stores to stay safe.

“Some are even using scuba gear,” said Andrew Miller, President of the Western Australia state branch of the Australian Medical Association.

“We have doctors and nurses who have been disciplined for trying to wear a mask at work. It’s a situation full of conflict and confusion.”

Health workers say the guidelines on using PPE issued when Australia only had a few COVID-19 cases were now no longer adequate as the disease was spreading throughout the community, including asymptomatic carriers who may be among patients arriving in hospitals for other conditions.

They say the highest standard PPE is now necessary throughout the hospital, not just when dealing with confirmed COVID-19 cases, especially in the emergency department.

Miller said there was a lot of PPE in storage across Australia that was not being made available to frontline healthcare workers now.

“Our frontline medical staff do not trust that PPE would be available when they need because they have seen in other countries healthcare workers dying from a lack of PPEs,” he said.

A global shortage of N95 masks and other protective equipment has sparked anger and protests by healthcare workers in the United States and elsewhere.

Australian medical workers have sent a petitihere to Prime Minister Scott Morrison, demanding access to safe PPE. The petition had gathered more than 155,000 signatures by Sunday.

South Australia Health was considering an untried approach of collecting used N95 masks, sterilising and re-using them, according to a report by the Australian Broadcasting Corp. here

Gerard Hayes, the national president of the Health Service Union, said authorities needed to be transparent on how much PPE will be available and whether it will be enough if demand surges further.

“As demand and pressure on health services increases it will be good to get some clarity on how big a stockpile there is and how it will be distributed,” Hayes said.

“That will give confidence to our members. Right now they don’t have that confidence.”