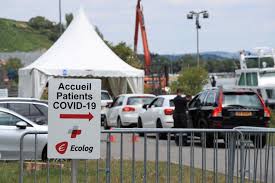 Luxembourg, which has been added to Britain’s coronavirus quarantine list, is being unfairly held up as the sick man of Europe and its large number of COVID-19 cases reflects its unrivalled level of testing, a government source said on Friday.The European Centre for Disease Prevention and Control says Luxembourg had 240.6 COVID-19 cases per 100,000 population over the last 14 days, much higher than any other country in the European Economic Area.The rate in Spain, another country from which passengers arriving in Britain must quarantine for 14 days, stood at 50.7. Luxembourg was added to the quarantine list late on Thursday.“We are not happy, obviously, but what is most important is that we keep borders open with our neighbours,” the government source said.In the week to July 26, Luxembourg tested 65,436 residents, about 10% of its population. Positive tests were fewer than 1%, a number which Luxembourg officials say is much lower than the equivalent in the country’s neighbours. About a third of the positive tests were from people without symptoms.German plans to introduce a requirement that Luxembourg visitors can enter the country only after having a negative COVID-19 test have caused more consternation than the British order.Luxembourg is the only European Union country on the German ‘high-risk’ list although parts of Spain are also included.Luxembourg Foreign Minister Jean Asselborn summoned the German ambassador on Wednesday to say Germany should take into account Luxembourg’s special situation and its world-leading tests per capita rate.Cross-border workers make up just under half of all workers in Luxembourg, while for the health sector over half of the workforce lives in neighbouring Belgium, France or Germany.