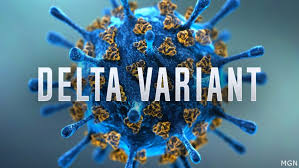 “Acknowledge the war has changed,” it said. “Improve communications around individual risk among vaccinated.”

It described the Delta variant as no less transmissable than chickenpox and more transmissible than a host of other diseases, such as MERS, SARS, Ebola, smallpox, the common cold and seasonal flus, including the flu that caused the 2018 pandemic.

It recommended prevention measures that included making vaccines mandatory for health care professionals to protect the vulnerable and a return to universal wearing of face masks.

The CDC confirmed the authenticity of the document, which was first reported by the Washington Post.

While vaccinated people were less likely to become infected, once they contracted such “breakthrough infections” they might be just as likely as the unvaccinated to pass the disease on to others, the document said.

‘VIRUS HAS BECOME FITTER’The World Health Organization said hard-won gains in battling COVID-19 were being lost as the Delta variant spreads but that vaccination could still save lives.“

The vaccines currently approved by the WHO all provide significant protection against severe disease and hospitalisation,” the global health body’s top emergency expert Mike Ryan told a news briefing. “We are fighting the same virus but a virus that has become fitter.”

The fastest-spreading and most formidable version of the coronavirus that causes COVID-19 has upended assumptions among virologists and epidemiologists about the disease, even as vaccines have let many countries lift social restrictions. Delta has become the dominant variant globally, documented in 132 countries to date, according to the WHO.

On Tuesday, the CDC, which had advised vaccinated people months ago that they no longer needed to wear masks, reversed course, saying even the fully vaccinated should wear face coverings in situations where the virus was likely to spread.

The main thing that does change (because of Delta) is that masks will still be used and that in countries where this requirement has been lifted, it will have to be re-introduced,” said Carlo Federico Perno, head of microbiology and immunology diagnostics at Rome’s Bambino Gesù Hospital.

ASIAN COUNTRIES TIGHTEN RESTRICTIONSCountries in Asia, many of which avoided the worst outcomes that hit Western nations in 2020, have been particularly hard hit in recent weeks by the spread of Delta, first detected in India. Australia, Japan and the Philippines were among countries to announce tighter COVID-19 restrictions on Friday“

We know from the research that it (Delta) has a viral load 1,000 times higher than previous variants, that’s why we see more cases because it transmits more easily and faster,” Dicky Budiman, an epidemiologist from Griffith University in Australia’s Queensland state, told Reuters.

He said Delta appears to cause more severe symptoms, especially regarding breathing difficulties.

Australia, which had previously kept infection under control but has been far slower than other rich countries to vaccinate the public, has been imposing lockdowns. From Monday, army personnel will help police its biggest city Sydney, checking that people who have tested positive are isolating.

The Philippines announced a plan to put the Manila capital region, home to more than 13 million people, in lockdown for two weeks.

In Japan, where a surge in cases has overshadowed the Olympic Games, the government proposed states of emergency through the end of August in three prefectures near Tokyo and the western prefecture of Osaka.“

Infections are broadening. The situation is extremely severe,” Economy Minister Yasutoshi Nishimura said, warning infections had not yet reached a peak.

Vietnam, which has fully vaccinated less than 1% of its 96 million people, is mobilising private hospitals to take COVID-19 patients. After successfully containing the virus for much of the pandemic, it has been facing record daily increases in infections since late April.“

The COVID-19 pandemic is evolving in a very complicated manner and is on the worsening trend in many cities and provinces,” The Ministry of Health said in a statement.