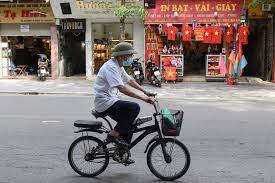 HANOI (Reuters) – Vietnam will impose movement restrictions in the Mekong Delta city of Can Tho for 14 days starting on Monday, the government said on Sunday, as the Southeast Asian country battles its worst outbreak of the pandemic.

The city of 1.23 million people in the far south has reported seven infections over the past week, the government said in a statement.

After successfully containing the disease for much of the pandemic, Vietnam has faced a more stubborn outbreak since late April, with daily infections climbing to record levels.

The health ministry reported 1,953 new infections on Sunday, the seventh straight day of more than 1,000 cases, and exceeding Saturday’s record of 1,853. Most of the cases were recorded in Ho Chi Minh City, the epicentre of the country’s outbreak.

Vietnam has recorded 29,816 infections in total and 116 deaths – very low figures compared with some European nations, India and the United States.

The country has over the past week begun imposing restrictions on movement in major cities, including the economic hub of Ho Chi Minh and the capital Hanoi.