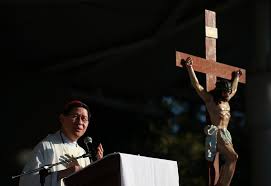 Cardinal Luis Antonio Tagle has become the highest-ranking Vatican official known to have tested positive for the coronavirus. The Vatican said on Friday that Tagle, 63, a Filipino who heads the Vatican’s missionary arm, had tested positive when he arrived in Manila on Thursday. Tagle, who met Pope Francis in a private audience on Aug. 29, tested negative on Sept. 7.Vatican spokesman Matteo Bruni said Vatican health officials were checking people who had come into contact with Tagle in recent days. He did not say if this included the 83-year-old pope, who is believed to be tested regularly. He said Tagle did not have any symptoms and would go into quarantine in Manila. The pope held a series of private audiences on Thursday and Friday. On Wednesday, he held his weekly audience before a limited crowd of about 500 people. Only about a dozen people have tested positive for the virus in the Vatican, and the few who were hospitalized with symptoms have recovered.