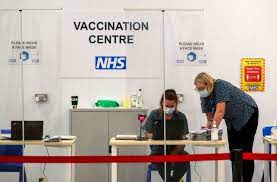 LONDON (Reuters) – England’s fast rollout of COVID-19 vaccines prevented over 10,000 deaths of people aged 60 and older by the end of March, according to an analysis by Public Health England.

England experienced a peak in infections, hospitalisations and deaths in January, but the toll would have been even worse without the rapid vaccination programme that began on Dec. 8, according to the study.

Over 15 million doses of vaccine were given to adults aged 60 and over in England by the end of March, preventing an estimated 10,400 deaths, mostly among those aged 80 and over, Public Health England said.

The analysis compared the reported number of deaths up to the March period with the number that would have been expected had vaccines not been delivered at that time.

Close to 127,000 people have died within 28 days of testing positive for COVID-19 in the United Kingdom.

The vaccination campaign accelerated in March. A total of 31.8 million people across the United Kingdom have had at least one dose, while 6.1 million people have had two.

Green, amber or red: UK to classify travel destinations in May
After weighing guidance, Costa Rica to use AstraZeneca vaccine