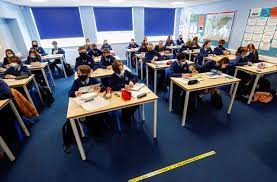 UK minister: no decision yet on COVID-19 vaccines for healthy children

LONDON (Reuters) – British vaccines minister Nadhim Zahawi on Sunday said a decision had not yet been taken on whether healthy children aged 12- to 15-years-old should be vaccinated against COVID-19, following reports that a rollout could begin in the coming days.

Britain’s Joint Committee on Vaccination and Immunisation (JCVI) on Friday declined to recommend vaccinations for children in that group, taking a precautionary approach due to a rare risk of heart inflammation, but adding the issue was finely balanced.

The government is consulting medical advisers to seek advice on wider considerations, such as the impact on schools, and may still give the go-ahead to broad vaccination of the age group.

Some newspapers reported confidence among ministers that the chief medical officers would swiftly back shots for healthy 12- to 15-year-olds, but Zahawi said the government would not prejudge the decision.

“No decision will be made until we hear back from the chief medical officers,” Zahawi told the BBC.

Children are being widely vaccinated already in the United States, Israel and many European countries.

British officials have emphasised that 12- to 15-year-olds who are vulnerable to COVID-19 are already eligible for vaccination, as well as all people over 16.

The four nations of the United Kingdom, which have recorded 133,000 COVID deaths, control their own health policy, although all have followed JCVI advice on vaccine rollout thus far.

Zahawi confirmed that proof of vaccination would be required in England for some large events from the end of this month once all adults have been offered two shots.

He also said that the government was still finalising plans for a vaccine booster programme following interim advice from the JCVI that one might be needed for the vulnerable and elderly.

“It is very likely that we will begin boosting those groups, as… I hope the interim then becomes final advice, by the middle of this month,” he said.