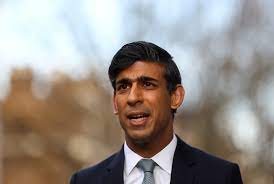 LONDON, Aug 1 (Reuters) – Britain’s Finance Minister Rishi Sunak has pressed for an easing of travel restrictions to offer respite to the tourism sector amid concerns that the country is not reaping the benefit of its vaccination programme, the Sunday Times reported.

Sunak had written to Prime Minister Boris Johnson warning of the impact that Britain’s strict border controls were having ahead a meeting of ministers on Thursday to consider changes, the newspaper said, citing a source familiar with the letter.

England last month lifted the requirement for fully vaccinated Britons returning from medium-risk countries to have to quarantine.

Visitors from the EU and United States with the same status will also be exempt from Monday. However, travellers still have to take expensive tests before departure and shortly after arrival.

They said green status should increasingly become a default, given that nearly 90% of British adults had been given one vaccine and more than 70% had two, and domestic restrictions had eased.

“On this basis there is no reason why, and it is essential, that much of Europe including the key volume markets, the U.S., Caribbean and other major markets, cannot turn green next week in time for the remainder of the summer peak,” bosses of Virgin Atlantic, easyJet, British Airways, Jet2.com, Loganair, Ryanair and TUI UK & Ireland said in a letter shared with media.

They said a continued requirement for expensive COVID-19 tests would have a huge impact on aviation.

“We have seen no evidence that this regime is necessary for fully vaccinated travellers or those from Green countries, or that effective, cheaper rapid tests cannot be used from higher risk destinations,” they said.($1 = 0.7191 pounds)