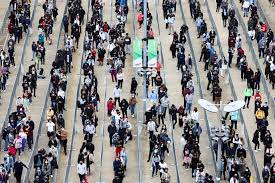 LONDON, June 27 (Reuters) – Britain’s mass COVID-19 vaccination campaign has weakened the link between infections and deaths but it has not yet been completely broken, the head of a scientific advisory body to the government said on Sunday.

Prime Minister Boris Johnson is hoping to lift most remaining coronavirus restrictions on July 19 after being forced to postpone any further easing this month because of a growing number of cases largely from the more infectious Delta variant.

He was asked if there was enough data to say vaccinations had broken the link between the virus and serious illness and death.

“They’ve certainly weakened the link,” Horby said of the vaccination programme, which has given a first dose to more than 80% of the adult population and a second dose to more than 60%, according to official data.

“We’re definitely seeing increasing infection rates, but what we’re seeing is a much lower level of hospitalisation, so that link is really, really much weaker which is really fantastic but it’s not completely broken.”

The United Kingdom recorded 18,270 new coronavirus infections on Saturday, the highest daily rise since Feb. 5, and 23 deaths, official data showed. Overall, Britain has had one of the highest coronavirus death tolls in the world, with more than 128,000 deaths. Horby also said there might be a case to argue that the arrival and spread of the Delta variant – which has driven the current wave of infections – could have been delayed or prevented if stronger border measures had been in place.

“But there is an obvious trade-off that policy makers and politicians have to make between absolute complete restrictions and stopping various viruses coming in,” he added.

Prevent transmission to prevent variants, WHO says
Sydney and Darwin in lockdown as COVID-19 cases pop up across Australia