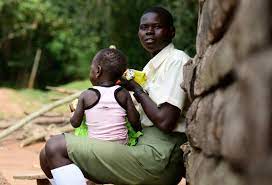 BUGULA, Uganda, Feb 28 (Reuters) – At a tumble-down wooden shack in a fishing village on the shores of Lake Victoria in Uganda, 17-year-old Margaret Babirye cuddles her baby at lunch break before dashing back to school – a right she could only have dreamed about before Uganda’s reforms. Babirye is one of thousands of girls benefiting from a new Ugandan government policy encouraging girls who have given birth to return to class, part of a broader trend documented by Human Rights Watch where African nations are encouraging young mothers back to school. “I made a mistake giving birth while still young and in school but God has big plans for me, so I decided to return to school,” aspiring nurse Babirye told Reuters as she fed biscuits to her daughter, one-year-old Pretty Miracle Laamalu.The government closed schools in March 2020, part of sweeping measures to curb the COVID-19 pandemic. The new policy was introduced in December 2020, but because schools were shut until January 2022 it has only just taken effect.One of many side-effects of the closures was a spike in teen pregnancies. According to the United Nations Population Fund, Uganda recorded 290,219 teenage pregnancies from January to September 2021. The year’s total will substantially surpass the 354,000 teen pregnancies recorded in 2020 and 358,000 in 2019.Babirye, whose mother sells charcoal, said a young fisherman seduced her.”We were not studying, I was idle and I think I was rebellious, I was not listening to my parents. I felt bad after getting pregnant,” she said. “I couldn’t move around in the neighbourhood because of the shame.”Pregnant at age 15, she was scared she would not be allowed back to school. But the new policy requires schools to readmit girls after they have given birth and parents can report school heads who refuse.Some Ugandan religious leaders oppose the shift, however.Bishop William James Ssebaggala, head of Mukono diocese about 30 kilometres east of Uganda’s capital, told Reuters the church had opened schools to promote “knowledge … morals and also the fear of God”.Ssebaggala said they were opposed to young mothers in class because their relationship with God is broken.”Children learn by seeing, whatever they see is what they learn. If a teacher misbehaves, they think that is the way to go. If such girls come in school … morality falls out,” he said.In a September 2021 report, New York-based rights group Human Rights Watch (HRW) hailed Uganda as one of five sub-Saharan African countries that has instituted policies since 2019 protecting education rights of pregnant school girls and adolescent mothers.Thirty African countries now have such policies, HRW said, although a few still block young mothers and pregnant girls from education.Tanzania, where the former president banned pregnant girls from school, reversed its policy in November.