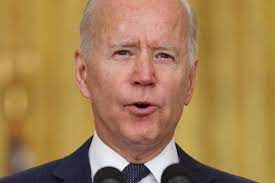 The Wall Street Journal reported on Wednesday that U.S. health regulators could approve a third COVID-19 shot for adults beginning at least six months after full vaccination, instead of the previously announced eight-month gap.

“The question raised is: should it be shorter than eight months, should it be as little as 5 months? That’s being discussed,” Biden told reporters at the White House, adding that he had discussed the issue with his chief medical officer, Dr. Anthony Fauci, earlier on Friday.

Biden noted that the U.S. booster program was “promising” and on track to start in mid-September, pending regulatory approval.

Top U.S. health officials, in a separate COVID briefing on Friday, said U.S. cases of the novel coronavirus continue to rise amid the fast-spreading Delta variant. Vaccination rates were also higher, they said, with half of children aged 12 to 17 having received at least one shot as schools begin the new academic year.

Deaths and hospitalizations up 11% and 6% respectively over the past 7 days nationwide, with cases up 3% over the past week, said U.S. Centers for Disease Control and Prevention Director Dr. Rochelle Walensky.