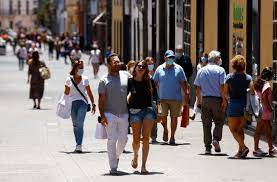 U.S. issues ‘Do Not Travel’ advisories for Spain, Portugal over COVID-19 cases

WASHINGTON, July 26 (Reuters) – The U.S. Centers for Disease Control and Prevention (CDC) and State Department on Monday both warned against travel to Spain, Portugal, Cyprus and Kyrgyzstan because of a rising number of COVID-19 cases in those countries.

The CDC raised its travel advisory to “Level Four: Very High” for those countries telling Americans they should avoid travel there, while the State Department issued “Do Not Travel” advisories.

Spain reopened its borders to U.S. tourists in June and has been a popular destination for Americans since then.

The CDC on Monday also raised its rating to “Level Four” for Cuba, while the State Department already had Cuba at the highest “Do Not Travel” rating.

The CDC also raised concerns about the rising number of COVID-19 cases in Israel, the West Bank and Gaza, lifting its travel health notice by two levels to “Level 3: High,” while the State Department rated Israel at “Level 3: Reconsider Travel.

“In June, the CDC had lowered its travel advisory rating for Israel to “Level 1: Low.”

The CDC and the State Department also raised Armenia to “Level 3.”

The “Level 3” rating says unvaccinated travelers should avoid nonessential travel to that country and is one level below the CDC’s most severe travel rating.

In June, the CDC eased travel recommendations for more than 110 countries and territories as it revised its methodology for assessing COVID-19 risks.

But as cases rise, the CDC has been issuing new warnings and last week advised against traveling to the United Kingdom.