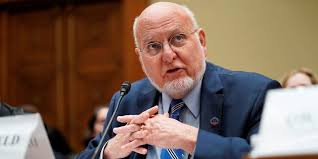 WASHINGTON (Reuters) – The coronavirus outbreak could reach its peak in the United States this week, a top U.S. health official said on Monday, pointing to signs of stabilization across the country.

The United States, with the world’s third-largest population, has recorded more fatalities from COVID-19 than any other country, more than 22,000 as of Monday morning according to a Reuters tally.

About 2,000 deaths were reported for each of the last four days in a row, the largest number of them in and around New York City. Experts say official statistics have understated the actual number of people who have succumbed to the respiratory disease, having excluded coronavirus-related deaths at home.

“We are nearing the peak right now,” Robert Redfield, director of the Centers for Disease Control and Prevention (CDC) told NBC’s “Today” show. “You’ll know when you’re at the peak when the next day is actually less than the day before.”

Sweeping stay-at-home restrictions to curb the spread of the disease, in place for weeks in many areas of the country, have taken a painful toll on the economy, raising questions over how the country can sustain business closures and travel curbs.

On Sunday, a Trump administration official indicated May 1 as a potential date for easing the restrictions while cautioning that it was still too early to say whether that goal would be met.

Redfield refused to give a time frame for the re-opening of the U.S. economy and praised social-distancing measures that he said helped curb the mortality rate.

“There’s no doubt we have to reopen correctly,” Redfield said. “It’s going to be a step-by-step gradual process. It’s got to be data-driven.”

Nancy Pelosi, speaker of the U.S. House of Representatives, cautioned that the country was not prepared to end the shutdown.

“We all desire an end to the shutdown orders so we can get Americans back to work and back to normal,” Pelosi said in a statement. “However, there is still not enough testing available to realistically allow that to happen.”

This week Congress will work on further measures to soften the blow of the pandemic. Democrats want to add money for other anti-coronavirus efforts to a measure targeted at small businesses, including funding for rapid national testing and personal protective equipment.

President Donald Trump retweeted a call to fire Dr. Anthony Fauci after the country’s top expert on infectious diseases said lives could have been saved if the country had shut down sooner during the novel coronavirus outbreak.

The retweet fueled speculation Trump was running out of patience with the popular scientist and could fire him. The White House on Monday did not comment on Trump’s retweet.