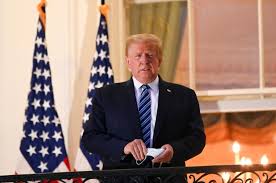 U.S. President Donald Trump has had no COVID-19 symptoms for the past 24 hours, with a physical examination and his vital signs showing his condition remains sable, White House physician Sean Conley said on Wednesday.

Conley, in a statement released with Trump’s permission, said the president has been fever-free for more than four days and had not needed or received any supplemental oxygen since his initial hospitalization.

Trump was hospitalized on Friday after tests showed he had contracted COVID-19. He returned to the White House on Monday.