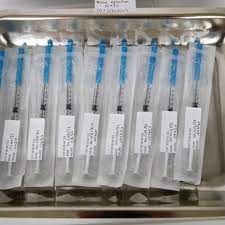 LONDON, Sept 2 (Reuters) – The roll-out of COVID-19 vaccinations is making life insurers more enthusiastic about offering cover to those with underlying health conditions – some without even knowing whether customers have been vaccinated.

Life insurers were imposing waiting periods to buy cover in the early stages of the pandemic for certain age groups, as well as for those who had been infected, saying the long-term health consequences of coronavirus were not fully understood. read more

But now that vaccines are prevalent in major economies such as Britain and the United States, life insurers see fewer risks.

Helen Croft, head of underwriting strategy at AIG Life (AIG.N), said the insurer had previously been more cautious in offering cover as a result of the pandemic, but the efficacy and widespread use of the vaccine meant it could provide insurance for more customers.

“The vaccine take-up has been excellent,” she said. AIG Life did not check if individual customers have been vaccinated, with Croft pointing out the insurer did not ask customers about other inoculations, such as for flu.

“I don’t think it’s necessary to be asking about the vaccine – the population level take-up gives us enough comfort,” she said.

Insurers such as LV=, Aviva (AV.L) and Zurich (ZURN.S) also said they did not ask vaccination questions, with Zurich highlighting the possible limitations of inoculation, such as long-term effectiveness or the impact of new variants.

Regardless of vaccination status, customers with underlying health conditions may pay up to five times the standard rate for life insurance products, sources said.

A reduction in the hospitalisation and death rate as a result of vaccination has meant that “almost all” insurers in Britain have reversed previous COVID-19 restrictions on life cover, said Phil Jeynes, director of corporate sales at insurance broker Reassured.

Britain was one of the first countries to roll out a vaccination programme and almost 80% of all over-16s are fully vaccinated, according to UK government figures.

Premiums have stayed much the same during the pandemic, Jeynes added. Rather than raising rates, insurers postponed providing cover for those above a certain age, with some underlying health conditions or who were recovering from COVID-19, industry sources said.

Life insurance premium volumes dropped by 11% in Britain and by 0.1% in the United States in 2020, according to Swiss Re. Sharp falls in household incomes due to lockdowns and job losses hit demand for life insurance last year, the reinsurer said in a recent report.

Swiss Re expects strong life insurance growth this year and next due to the economic recovery and increased consumer awareness of risk.

In the United States, where more than half of the population is vaccinated, major life insurers Prudential Financial (PRU.N) and Lincoln (LNC.N) told Reuters they did not ask about vaccines.

The Insurance Compact, standards adopted by 47 U.S. states, said it did not currently allow insurers to ask vaccination questions as state insurance regulation has not yet set public policy around the vaccine and underwriting.

However, some insurers in Britain are asking customers whether they have been inoculated, particularly if their health condition makes them more vulnerable to COVID-19, and this could affect the cost or size of their cover.

“For those that have been fully vaccinated, our risk appetite will be higher,” said Rose St Louis, protection director at Scottish Widows. “We may be able to offer improved terms to those who have had both vaccines.”

Legal & General (LGEN.L) typically imposes a 12-month waiting period on customers who are clinically vulnerable and where the impact of COVID-19 may be life-threatening.

“To avoid postponing applications for this 1% of new customers, we will now ask whether or not they have had their required vaccine doses…allowing us to give cover to customers when it would otherwise not be available,” an L&G spokesperson said by email.

Unvaccinated vulnerable customers would be declined cover for now, though allowances would be made for those who could not have the shot for medical reasons such as pregnancy, L&G said.

Insurers need to get clearance from their reinsurers for any underwriting changes they make, as reinsurers may otherwise be unwilling to provide that cover.

L&G said its reinsurers agreed with its approach, without naming them.

One global reinsurer, who declined to be identified, said it was supporting the stance of “several insurers” in Britain who were insuring customers in higher risk medical groups for larger amounts of cover, if the customers provided evidence that they were fully vaccinated.

Clive Allison, director, life and pensions at consultants EY, said the need for vaccine questions may be short-lived.

“There’ll be a convergence where most adults will have been double-vaccinated,” he said. “The ones that haven’t are most likely to be in the younger age bracket, and typically are not looking to take out insurance cover.”