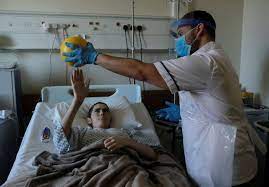 The first photo I ever took of my daughter, and the last

KAPPARA, Malta (Reuters) – I took the first photo of my daughter, Rebecca, moments after she was born on August 3, 2005.

Barely more than 15 years later, I took the last photo of my daughter moments after she died, of cancer, on January 3, 2021.I’m a photojournalist. It was only natural that I documented just about every moment of the beautiful life of Becs, as my wife, Marisa, and I called her.

Harder, much harder, was documenting her illness and death from a rare and extremely aggressive form of bone cancer.

Like the time she sat in darkness receiving IV fluids after a chemotherapy session, her long and lovely dark hair a memory.

The time she hugged her teddy bear Snuggles tight as she slept in her hospital room in the middle of a terrible series of procedures we hoped could save her.

And the time her mother wept over her body moments after Becs died, the freckles on her face a cruel symbol of her youth and beauty.

Last autumn, Reuters published a Wider Image photo essay of our family’s struggle with Becs’ illness, which had been made even more impossible by the coronavirus pandemic that had reached Malta, the island where we live. That essay ended with a moment of hope, after she had been released from hospital following months of grueling treatment:

“For Becs’ first outing a few days after she got out of hospital, I took her late at night to the northwest corner of the island, a relatively dark area, so she could try to catch a glimpse of the Comet Neowise. Although the comet was hard to view with the naked eye, Becs managed to see it with the help of my camera and long lens.

And then we spotted a shooting star. We made a wish – no prizes for guessing what that was.

”Hope was still a thing then, something I still fervently believed in, always choosing to believe the best-case scenario.

After her discharge from hospital in mid-July, I had really believed the worst was behind us. How wrong, how deluded I was – maybe always in denial about things. I didn’t realise at the time that the reason nothing seemed to be happening with a possible treatment option in England was because the consultants there didn’t believe she stood much of a chance, that the cancer would erupt again as it had already metastasised by the time she was first diagnosed in late 2019.

No one ever spelled it out to me – the day we found she was in considerable pain, a full month before she even had the first X-ray that showed she had a tumour in her shoulder that day in 2019, it was already too late for her.

See what I mean? Delusional and in denial – that was me to the hilt.

On the 31st of October, Becs posted on Facebook – “1 year.. it’s been 1 whole year since I was diagnosed with a rare type of bone cancer called Ewings Sarcoma. At that point I didn’t think I’d still be in this battle, but here I am with more chemotherapy and more radiotherapy ahead.. Honestly I thought I’d have my life back by now. I thought I’d be able to follow online school from home like any other normal student who’s not going to school. Instead I’ve been too unwell to even follow any.. I thought I was done with chemo and radiotherapy for good. But here I am reliving what I’ve gone through throughout this past year. There are days I’m angry and scared, but there are also days where I feel grateful for all the love and support everyone’s shown me when I needed it most. I could have never ever managed to fight this battle without my friends, family and even some people I don’t know personally. So, I just wanted to say.. THANK YOU

Becs had been heavily sedated over the previous week, so was pain free and unaware, according to the doctors. Her condition seemed to have nosedived late at night on Christmas Eve. It was the worst night ever – we spent the whole night awake. She was in such bad shape on Christmas Day, I didn’t expect her to make it to the end of the day, on this, her favourite day of the year. Wouldn’t there have been an awful sort of poetry to that?

She woke up for a couple of hours late that night, fervently disappointed that she’d missed Christmas but believing she’d just have to celebrate it once she got better and went home. Mars promised her she would eventually get home, but Becs replied, “Mummy, don’t put my hopes up too high.”

On the following two evenings, she again woke briefly, much to the surprise of her doctors, and we were able to chat, sharing some more immeasurably precious moments.

After that, she slipped into a deep coma and never regained consciousness, yet we carried on talking to her. I read to her lots, finished the Harry Potter book I’d be reading to her and started the next in the series, held her hand. They say that hearing is the last thing to go, so it was paramount to keep having her listen to our voices.

At the end, her breathing just got shallower and shallower, till it became very light gasps, with the gaps in between them growing longer. Then there were no more. I kept talking to her, convinced she could now hear me and understand me better than before, telling her not to be afraid. I told her I’d keep holding her hand as long as I could, but now she’d find others to take her hand, and whenever she felt she was ready, she should go with them. I kept looking up toward the ceiling – don’t people who have died and then been revived in hospital say they were watching everything from up near the ceiling? So was Becs watching from there? Was she confused, or did she know exactly what was happening and was calm and peaceful about it all? All the nurses had filed into the room and were standing around her bed in silent respect. I’m not sure if they understood what I was doing, why I was whispering to her while looking away from her body, but I didn’t care.

Word of Becs’ passing spread quickly. There was a lot of media coverage. The archbishop of Malta, Charles Scicluna, was informed during a High Mass at the country’s main cathedral, and announced her passing during the live TV broadcast. He was very emotional, and people told me he shed tears. He later got in touch with us and asked if he could lead the funeral mass.

We were only allowed 180 people at the church because of Covid-19 restrictions. It normally comfortably holds 600; even if these had been normal times, it would be overflowing. We decided to do a live stream of the service so that people could participate that way. It wasn’t easy to choose those 180 and contact them individually, but the distraction was a good thing. It’s the quiet, solitary moments, like when I’m in the shower, that it really all hits me hard.

After the funeral, Becs was taken to England for cremation. Mars and I had both agreed we couldn’t bear the thought, or the sight, of her in a wooden casket being lowered into the ground. Then I finally brought her home, as Mars promised her we’d do, though not in the way Becs understood at the time.

Every day, every moment that I’m thinking of her (and that’s a lot of moments), I’m desperately looking for the signs that people said we would come across, just like I’m desperate to dream of her, and yet I don’t. Maybe I’m trying too hard, and I need to just let things happen, and I’ll recognise them when they do.

In the months before she died, Becs had been playing a game on her iPhone – “Sky Children of the Light.” She wanted me to join in with her, so I upgraded my ancient iPhone to a newer model. I loved the game and loved playing it with her. As our avatars travelled together, soaring through the clouds and landscapes on a variety of quests, in different realms – which I eventually found out symbolised the different stages of life, from early childhood to death and beyond – she was my guide, my mentor, my teacher. She (her avatar, rather) would hold my hand and lead me everywhere, and that’s the way I wanted it. Throughout her life, I tried to guide and teach her, and now she was doing the same to me. I can’t tell if she was seeing this game as a sort of allegory of her own life – even if just on a subconscious level.

The only part of the game she didn’t show me was the bit where your character has to die in order to move forward; she said I wasn’t ready for it. Did she know she was going to die soon herself? She certainly never talked about it, or asked about it. We had earlier decided we wouldn’t tell her unless she specifically asked. How are you supposed to break that news to your child? To me, the game developed into a metaphor of what would happen once I eventually pass myself – she’ll be there waiting for me, to take and hold my hand, act as my guide and guardian, take me where I have to go.