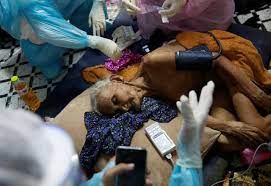 Chayaphon gives the 86-year-old woman oxygen before laying her on a stretcher and taking her to hospital in a pickup truck.

He does this throughout each day as a member of a new volunteer group called Zendai, or “connection”, founded four months ago to help vulnerable people who have become isolated due to the pandemic.

The group, which relies on donations, has more than 100 volunteers who handle calls to a hotline, respond to emergencies and conduct more than 10,000 rapid tests a day. Most of them are young people who have no formal medical training but are taught basic first aid response.

“Now, I have to perform first aid, provide oxygen or even do CPR (cardiopulmonary resuscitation) on people, so they can live for a bit longer to be able to make it to the hospital,” said Chayaphon, 27, who started off as a driver.

Word about the group has spread thanks to media attention and Facebook, where it posts personal stories of patients.

Thailand’s hospitals are being inundated with the country’s biggest wave of infections so far, which since April has accounted for the bulk of its more than 800,000 cases and close to 7,000 deaths.

Less than 7% of Thais have been fully vaccinated and 25% have received at least one dose. Thailand’s mass vaccination programme which began in June has been hampered by shortages as coronavirus infections soared to over 20,000 new daily cases recently.

“The existence of volunteer groups shows how the government has failed, so people have to help each other,” Chayaphon said.

A spokesperson for the government’s coronavirus taskforce referred Reuters to the Bangkok City government, which did not immediately respond to a request for comment.

Chayaphon works very long hours, without a day off, but has grown used to the frenetic pace and constant calls.

“It’s normal that cases come in, one after another,” he said. “Usually before I’ve finished with the first patient, I have to rush to another.”

While he fears becoming infected, he is undeterred having found a larger purpose in life.

“When people thank me it makes me feel self-worth and that I deserve to live in this world,” he said, tearing up.