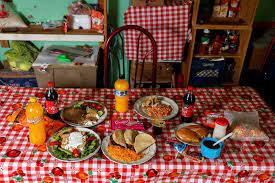 TEXCOCO, Mexico (Reuters) – Daniela was 11 years old when a doctor told her she would not live more than another six or seven years. Weighing 75 kilos (165 lb), about twice the recommended weight for her age, the Mexican girl had just suffered a minor heart attack.

That was two years ago. She still remembers the pain in her chest. Then she was also diagnosed with diabetes. Daniela knows the disease well: she watched eight family members die from its complications.

“The doctor told me that I’ll die, that I’ll not even turn 18 years old,” she said at her home in Texcoco, in the outskirts of the Mexican capital. Now Daniela is 14 years old and weighs 81 kilos.

Reuters was unable to contact the doctor, who treated Daniela at a different facility previously, but her current caseworker confirmed Daniela’s account.

“Instead of losing weight, I put on more,” she said.

Reuters recreated a table that shows what she would eat in a typical day and a nutritionist at her clinic calculated about 6,600 calories.

Daniela is one of about 150 girls and boys treated by doctors, nutritionists and psychologists at the Hospital Infantil de Mexico Federico Gomez in Mexico City over the past 12 years.

The girl and seven others agreed to speak to Reuters in the presence of their mothers and a healthcare worker about their struggles to control health problems and lose weight.

Reuters also spoke to four adults about their long-term struggles with obesity since childhood, one of whom has since died of complications from diabetes.

Reuters agreed not to publish their surnames or pictures that would reveal their identities because almost all are minors and some, including Daniela, are considered vulnerable by the clinic.

Despite efforts to limit sales of junk food to children and tax consumption of sugary drinks, Mexico’s diabetes problem is worsening.

In two years, the proportion of the population suffering from the disease jumped a full percentage point to 10.3% – one of the highest rates in the world – as more than a decade of poor eating habits started to be reflected in government statistics.

“It’s a diabetes time bomb,” said Barry Popkin, a professor at Gillings School of Global Public Health at the University of North Carolina, who has studied obesity and other nutrition-related diseases, and more recently the relationship with COVID-19.

During the pandemic, the issue has taken on urgency here.

Popkin said it was clear nutrition-related diseases – obesity, diabetes, hypertension and others – were stoking COVID-19 mortality rates in Mexico, which are among the world’s highest.

Daniela, who also has a kidney problem, said she follows her exercise and nutrition plans as much as possible – and she likes the taste of some fruit and vegetables.

But her diabetes is hard to control and when her blood sugar plummets, she then needs sweets to regulate it. “It gives me a lot of anxiety and then I need something sweet.”

Daniela’s mother, Angelica, said she feared every day for her only daughter’s life. Both have received treatment by a psychologist.

“It’s so hard because she’s not getting better,” Angelica said. “She’s getting worse.”

Over 80% of Mexicans consume soft drinks daily, a Mexican government nutrition survey from 2018 showed. Over half of teenagers eat packaged snacks, sweets or desserts every day.

Betzabe Salgado, a nutritionist at the children’s hospital, said ingredients in processed foods were “in a way addictive” because they are more flavorsome as well as cheap and widely available.

Scientific studies – including one by the University of Michigan – have shown that processed food, much of which is high-calorie, may indeed have addictive potential.

More than half of Mexico’s adult population works informally. Parents often earn less than the daily minimum wage of 144 pesos ($7) and commute long hours, said Salgado, leaving them no time, or money, to purchase and prepare nutritious meals.

Pricila had a gastric sleeve surgery, during which a part of the stomach is removed, for weight loss at 16. Realization hit her when aged 15 she weighed 113 kilos, equal to her father.

In a typical day, she would eat over 5,200 calories. Pricila, who has a metabolic disease, said even with exercise and a nutrition plan her weight loss had stalled, making her a candidate for the surgery.

“When I tried to lose weight, there was temptation everywhere,” she said. Now 18, she weighs 83 kilos.

“It was a real feat, especially because I was so used to eating junk food, sweets, all the time.”

Mexico’s Senate in February prohibited the sale of food with poor nutritional value and high calorie content in and outside schools. Food also needs to be labeled if it has high salt, sugar or fat content.

But the United States, European Union, Canada and Switzerland, home to some of the world’s largest food companies, publicly pressed here Mexico to delay the initiative, citing the COVID-19 pandemic “which has placed significant pressure on the food and beverage industry.”

Weighing 137 kilos aged 16, more than twice the recommended weight, Carlos tested positive for COVID-19 in January and spent a month in hospital, much of that in pediatric intensive care.

A borrowed oxygen tank stands in the middle of his living room while a schedule stuck to the fridge marks appointments with the nutritionist, lung specialist and COVID-19 tests.

Carlos, now 17 and in the same program as Daniela and Pricila, said he started overeating when pressure intensified at school. Attempts to change his eating habits repeatedly failed – he would typically eat 5,850 calories.

“I woke up and realized that if I don’t make a change, I’ll always be like this: I’ll never mature; always have this body,” Carlos said. “Sometimes my body wants something sugary, but I say no.”