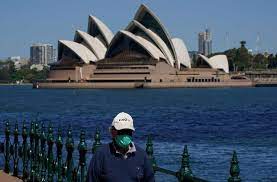 SYDNEY (Reuters) – Australian doctors warned a too-rapid easing of COVID-19 restrictions in Sydney could put pressure on health systems and risk lives, as the country’s biggest city prepares for an end to more than 100 days in lockdown next week.

Stay-at-home restrictions are due to be lifted on Monday after New South Wales state hit a targeted 70% for full vaccination of its adult population. Authorities on Thursday bumped up permitted limits for home gatherings, weddings and funerals.

The Australian Medical Association (AMA), however, representing the country’s doctors, said opening “too fast or too early” will result in avoidable deaths and the reintroduction of lockdowns.

“New South Wales must not be reckless at this critical time,” AMA President Omar Khorshid said in a statement late on Thursday.

State Premier Dominic Perrottet has defended his move to bring forward the relaxation of several restrictions amid a steady fall in infections, saying the pandemic “is an economic crisis too”.

Officials have a staggered plan to ease curbs in coming weeks when full inoculation hits 70%, 80% and 90% of adults, a boost for Australia’s A$2 trillion ($1.5 trillion) economy as it tries to avoid a second recession in as many years.

Daily infections in New South Wales rose on Friday after falling for the past seven days, as first-dose inoculations in people over 16 neared 90%. A total of 646 cases were reported, the majority in state capital Sydney, up from 587 on Thursday. Eleven new deaths were registered.

“There is no indication that this new strain presents any differences regarding transmission, vaccine effectiveness or severity,” she said.

Victoria, meanwhile, logged a record 1,838 new cases on Friday, the highest number of any state in the country since the pandemic began, exceeding the previous high of 1,763 set three days earlier. There were five new deaths.

Australia is fighting a third wave of infections fuelled by the Delta variant that has locked down Sydney and Melbourne, its largest cities, and capital Canberra, forcing the closure of thousands of businesses and people to remain at home.

The country’s COVID-19 numbers are still far lower than many comparable countries, with some 122,500 cases and 1,405 deaths.

Neighbouring New Zealand, which had stayed largely virus-free for most of the pandemic until a Delta outbreak in mid-August, reported 44 new local cases, up from 29 on Thursday.