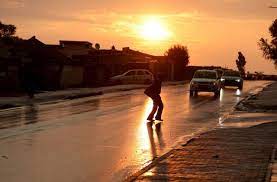 JOHANNESBURG (Reuters) -South Africa extended tight COVID-19 rules on Sunday for another 14 days, maintaining restrictions that include a ban on gatherings, a curfew from 9 p.m. to 4 a.m. and a prohibition on the sale of alcohol.

The country, the worst-hit on the African continent in terms of recorded cases and deaths, is in the grip of a third wave of infections driven by the more infectious Delta coronavirus variant.“

Our health system countrywide remains under pressure,” President Cyril Ramaphosa said in a televised address to the nation.

Ramaphosa moved the country to the fourth level of a five-tier restriction scale in late June as infections climbed, promising to review the restrictions after two weeks.

On Sunday he said the cabinet had decided to maintain “adjusted alert level 4” for another 14 days, although restaurants would be able to serve food on their premises again subject to strict health protocols. Gyms would also be allowed to reopen under certain conditions.

Ramaphosa added that a government advisory committee was working on how soon to bring Sinovac’s CoronaVac vaccine into the COVID-19 immunisation programme.

So far the vaccine campaign has been slow, with 4.2 million doses administered out of a population of 60 million, but officials are hoping to ramp up daily vaccinations to at least 300,000 by the end of August.

Ramaphosa said the African Union and European Union had reached an agreement for local pharmaceutical company Aspen to deliver more than 17 million Johnson & Johnson vaccine doses to South Africa and other African countries over the next three months.

Aspen is sourcing vaccine ingredients from J&J to package them in South Africa, a process known as fill and finish.

Ramaphosa said his country was negotiating for the drug substance to be produced locally, “so that we have a fully-owned African vaccine manufactured on African soil”.