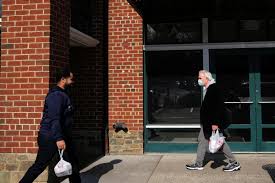 (Reuters) – Some U.S. life insurers are deciding not to gamble on older Americans during the coronavirus crisis by temporarily suspending applications from certain age groups or imposing tougher requirements.Prudential Financial Inc (PRU.N), Lincoln National Corp (LNC.N) and Protective Insurance Corp (PTVCB.O) are among the insurers that have made changes. Prudential and Protective are temporarily halting applications from individuals aged 80 or older, while Lincoln has postponed approving policies for that age group and others, the companies said.Mutual of Omaha Insurance Co and Penn Mutual Life Insurance Co are temporarily suspending applications for individuals aged 70 or older. Securian Financial has stopped accepting new applications for those 71 and older until at least June 15, according to memos seen by Reuters.Some insurers are also suspending applications for people in their 60s who previously may have been eligible for coverage despite common health problems such as diabetes or asthma.Insuring older Americans can be a big risk for U.S. life insurers under the best of circumstances, but it brings in hefty premiums. A healthy 40-year-old woman pays about $180 annually for a $250,000 15-year term life policy, while a healthy 70-year-old woman pays $2,244, or 1,146% more, according to online brokerage Policygenius.Many people buy life insurance when they are younger, concerned they could die and leave their families impoverished.Life insurance may seem less critical for older people, but some see it as a path to a legacy, said Byron Udell, president and chief executive officer of insurance brokerage AccuQuote.“Many people haven’t been able to accumulate much of anything and want to leave something behind beyond a bunch of socks and underwear,” Udell said.The changes generally apply to life insurance that requires “full underwriting,” a process to determine risk and pricing, which includes reviewing health records and can require a medical exam. The review can facilitate qualifying for significantly higher coverage amounts than other types of life insurance.Insurers said they are making the changes for their companies’ long-term financial health and ability to pay claims for existing policyholders. A Mutual of Omaha spokeswoman said the company acted on the advice of its reinsurers, companies that insure life insurers.People aged 65 and older account for eight out of every 10 deaths from the novel coronavirus in the United States, according to the U.S. Centers for Disease Control and Prevention (CDC).Policies for people in their 70s represent anywhere from 2% to 3.5% of sales, some of the insurers told Reuters.