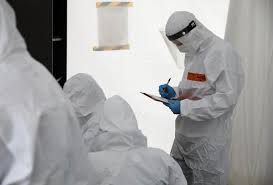 The Polish government urged its citizens to stay at home and ordered new national restrictions such as closing gyms, pools and aquaparks, after coronavirus cases rose by 24% to a record on Thursday.

Prime Minister Mateusz Morawiecki said he hoped to avoid a full lockdown but further restrictions could not be ruled out.

“The main recommendation … is stay home and if you can work from home, then do so,” he told reporters.

Morawiecki, who has spoken in public frequently without a mask on, wore one on Thursday, and stayed away from a European Union summit in Brussels after coming into contact with an infected person.

His government has faced mounting criticism as cases hit record highs, with opposition politicians and the medical community accusing it of not doing enough to protect against a second wave.

“The (healthcare) system was never operational, even before the pandemic. Without support … it is like an intensive care patient,” Andrzej Matyja, head of the Polish Supreme Medical Chamber, told radio RMF.

Under new restrictions for the so-called “yellow zone”, weddings and other parties are limited to 20 people, but dancing is forbidden.

From Saturday, restaurants will close at 9 p.m., sporting events will take place without spectators, and pools and gyms will be shuttered.

No weddings can be held in the more restrictive “red zones”, which include Warsaw, from Monday, and public gatherings will be limited to 10 people from Saturday. High schools will adopt distance learning.

“It’s a pity the decision-making process ignores any suggestions from the medical community,” Tadeusz Urban, head of the medical chamber in the Silesia region, said in a letter to the health minister.

Local media say some schools have complained that health authorities have been rejecting their requests to close schools because of outbreaks.

The lower house of parliament will likely hold an emergency meeting on Friday to discuss a healthcare bill that may make it compulsory for doctors to treat COVID patients when ordered to do so.

“We cannot afford to have so many doctors avoid supporting healthcare in the fight against the pandemic,” lower house deputy speaker Ryszard Terlecki said, according to news agency PAP.

“We should be disciplined, wear masks, keep our distance, avoid (large) gatherings. I also encourage people to work on their immunity. For example, apples are extremely healthy. An apple a day keeps the doctor away,” PiS lawmaker Stanislaw Karczewski, who is also a doctor, told RMF.