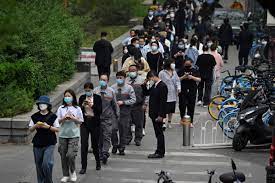 SHANGHAI, July 4 (Reuters) – Parts of eastern China are running fresh rounds of mass COVID-19 testing, as the country faces new waves of infections while recovering from impact of the spring outbreaks that hit Beijing and Shanghai.China continues to demand local authorities detect and contain new infections as soon as possible in its “dynamic COVID zero” strategy, although it has warned against expanding strict curbs unnecessarily as it struggles to revive the economy.Daily numbers of locally transmitted infections in mainland China increased to more than 300 over the weekend compared with a few dozens in late June. While tiny by global standards, local officials have still closed some businesses and locked down more than a million people.In the eastern province of Anhui, which reported most of China’s local cases in the latest flare-up, its provincial capital Hefei said late on Sunday it is doing citywide testing every three days, after last month briefly scrapping weekly test requirements.Anhui’s Si town, where its 760,000 residents were told to stay home except for going out to do COVID tests, mandated citywide testing on Monday, its seventh round of mass testing.Lingbi town, also in Anhui, locked down its nearly 1 million residents and said it had cancelled an event for local businesses to meet government officials.In the southeastern province of Fujian, the Jiaocheng district and the town of Xiapu in the city of Ningde ran mass testing on Sunday.Ningde, where the world’s largest battery maker CATL (300750.SZ) is headquartered, reported 10 domestically transmitted COVID infections for Sunday, data from Fujian health authority showed on Monday.Mainland China reported a total of 380 new local infections for July 3, of which 41 were symptomatic and 339 were asymptomatic, the National Health Commission said on Monday.The infections were detected in the provinces of Anhui, Jiangsu, Liaoning, Fujian, Shandong, Shaanxi, Zhejiang, Guangdong and Sichuan, as well as in the city of Shanghai.There were no new deaths, keeping the nation’s reported fatalities at 5,226.