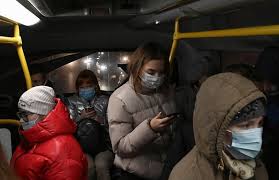 Russia is not planning to impose any blanket restrictions to contain the COVID-19 pandemic, President Vladimir Putin said on Wednesday, even as the country reported a record new daily death toll from the respiratory disease.

Infections have proliferated in recent weeks with 15,700 new cases reported on Wednesday, close to a record caseload confirmed earlier this week.

That raised expectations that Moscow might impose a widespread clampdown to curb the outbreak – restrictions that proved to be economically crippling earlier this year.

“Regarding the possibility of harsh, total measures – we are not planning to do it. The government does not have such plans,” Putin said at a meeting held by video link with Russia’s top business figures.

Earlier on Wednesday, Kremlin spokesman Dmitry Peskov said Russia was now better equipped to respond to the pandemic, and that safety precautions, hygiene and curbs imposed by local authorities were key.

“The work that has been done has already yielded results,” Peskov told reporters on a conference call. “The health system is ready to sustain the pressure caused by the pandemic.”

Russia’s health watchdog said it was investigating a report by local media outlet 161.ru that several people in a hospital in the southern city of Rostov-on-Don had died when their oxygen supply ran out. A city official denied the report.

Separately, a video clip posted on social media showed at least two dozen bodies in black bags on beds or lying on the floor in the basement corridor of a Siberian hospital treating COVID-19 patients.

The Altai region’s health ministry confirmed the authenticity of the video and said bodies had accumulated because doctors must conduct post-mortems on all COVID-19 victims and were unable to keep up despite working overtime.

On Wednesday, Russia recorded a daily record high of 317 deaths from COVID-19, pushing the total number of fatalities since the start of the pandemic early this year to 24,952.

With 1,447,335 infections in total, the vast country of around 145 million people has the world’s fourth largest caseload after the United States, India and Brazil.