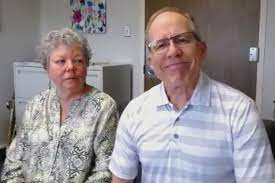 For Bill McKay, 69, of Haslett, Michigan, the U.S. approval of Biogen Inc’s (BIIB.O) controversial Alzheimer’s drug on Monday offers hope that the veteran of 29 marathons can keep on running.

For his wife, Jill McKay, 66, an office manager, it offers the hope that he will not get lost along the way.

“He can be running in a familiar location and still get disoriented and that’s a big worry for me. I work full time,” she said.

The drug, called Aduhelm, is the first treatment ever approved to target a cause of Alzheimer’s, with the aim of slowing progression of the mind-robbing disease. read more

The U.S. Food and Drug Administration approved the treatment despite contradictory evidence in two large clinical trials, in which the drug showed a benefit in one but not in the other, and after a panel of outside experts said the data failed to prove that the medicine works. read more

More than 900 centers are ready to start intravenous infusions in as soon as two weeks, at a cost of about $56,000 per year. read more

Bill McKay, a former coordinator in a lab that has been working on COVID-19 vaccines, was diagnosed with Alzheimer’s last year and has what he describes as “entry level” disease, including memory problems and trouble navigating. He can no longer drive a car, but he is able to care for himself.

He is among several patients seen by neurologist Dr. Cara Leahy of Memorial Healthcare in Owosso, Michigan, who has been prequalified as appropriate for treatment with Biogen’s drug. The hospital arranged for Reuters to speak with the couple and Dr. Leahy.

The FDA has required a confirmatory trial to demonstrate that the Biogen treatment works as intended to slow cognitive and functional decline by removing amyloid plaques from the brain, but that could take years.

Although the FDA approved the drug broadly for treatment of Alzheimer’s dementia, Leahy said she plans to offer it to patients in the earliest stages of the disease – the group tested in clinical trials.

She sees a big challenge to educate patients about the risks of the drug and the limited evidence of its efficacy. Biogen has estimated that around 1.5 million Americans are eligible for Aduhelm.

Patients must understand, “this is not a cure,” Leahy said. “We are hoping that it has some ability to slow down the progression for patients.

“It is not clear yet how much the drug will cost patients, most of whom are expected to be covered by the U.S. government’s Medicare program for people aged 65 and older.

Patients will likely have some out-of-pocket costs such as for coinsurance and a deductible, but so far Medicare has not made a decision. The McKays are waiting for guidance from their insurance company and Medicare.

They still need to learn more about what the drug can and cannot do, as well as side effects and other limitations.

“We have an appointment with Dr Leahy next week,” Jill McKay said.