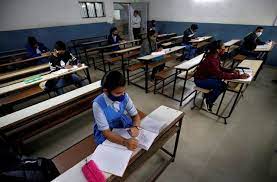 NEW DELHI (Reuters) – Many top Indian epidemiolgists and social scientists are urging authorities to reopen in-person school classes for all age groups, saying the benefits outweigh the risks especially as poor rural children are missing out on online education.

The recommendation comes as experts say another COVID-19 wave in India this year could be far less deadly here, because a dramatic rise in cases in April and May means a big majority of the population have been infected already, while more than half of its adults have been at least partly vaccinated.

India last month approved its first COVID-19 shot for people under 18, though as of now only adults are being immunised.

As new infections have stabilised around 40,000 a day in the past few weeks, some Indian states have restarted face-to-face teaching, mainly for middle school and above. Experts say that is not enough.

“Schools are an essential service. It has been wisely said that they should be the last to close and the first to reopen,” said a report released on Monday on school education roadscholarz. net by a group of scholars, including economist and social scientist Jean Dreze, that warned of a “looming disaster”.

“In India, the opposite has been happening: soon after the COVID-19 crisis struck in early 2020, all schools were closed without batting an eyelid and most of them are still closed today.”

The health and education ministries did not immediately respond to a request for comment. The federal government has largely left it to states to decide when to reopen schools.

An August survey of nearly 1,400 school children done by the scholars’ group found that in rural areas, only 8% were studying online regularly, 37% were not studying at all, and about half were unable to read more than a few words. Most parents wanted schools to reopen as soon as possible, it said.

The reasons were that many children did not have their own smartphone, mobile connectivity was poor, they did not have the money to pay for mobile Internet, schools were not sending study material or online education was too hard to grasp for some.

The Indian Association of Preventive and Social Medicine, whose roughly 6,000 members are doctors who have studied epidemiology, told the government in a report it was safe to resume all offline classes after taking precautions such as improved ventilation, physical distancing and masking.

Epidemiologists also say that as India’s last serological survey estimated that more than half of the country’s population of 6-17 years had already been infected, without any particular severity, there was no reason to worry that a future wave will specifically target the unvaccinated ones among them.

“The risk of moderate to severe disease in children is really low and vaccination is not a prerequisite,” said epidemiologist and public health expert Chandrakant Lahariya.

“Therefore, I believe that the technical experts should not rush to recommend vaccination of adolescents in India. The focus has to continue to be on achieving high coverage for all adult age groups,” he said in an email.