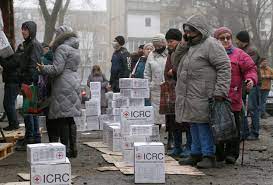 GENEVA, March 1 (Reuters) – Red Cross agencies appealed on Tuesday for 250 million Swiss francs ($273 million) to provide food, water and shelter to millions of people in Ukraine where the humanitarian situation is “deteriorating rapidly” and to those who have fled abroad.The International Committee of the Red Cross (ICRC) and the International Federation of the Red Cross and Red Crescent Societies – the world’s largest disaster relief network – issued the joint appeal as a huge Russian armoured column bore down on Kyiv, six days after Moscow’s invasion began. L1N2V408B”We need the funds in order to address the humanitarian needs which are already staggering – food, water, shelter, health care, psychological support – and they are growing by the hour,” Martin Schuepp, ICRC regional director for Europe and Central Asia, told a news briefing.A priority was to reach people detained during the conflict and the ICRC is in touch with all sides regarding visits to detainees, he said. All sides have an obligation to facilitate the return of dead bodies, and ICRC teams are ready to help but remain limited in their movement due to insecurity, he added.($1 = 0.9152 Swiss francs)