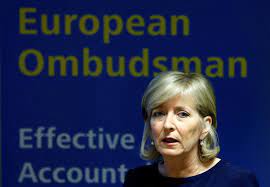 BRUSSELS, July 14 (Reuters) – The European Union’s ombudswoman criticised the European Commission for failing to find and publish text messages between the executive’s president, Ursula von der Leyen, and the head of Pfizer negotiating a massive COVID-19 vaccine deal.The Commission said last month that it no longer has the texts that led to the biggest contract ever for COVID vaccines in which the EU committed to buying 900 million Pfizer-BioNTech shots, with an option for another 900 million.The ombudswoman said it was a case of “maladministration” that served as “a wake-up call” for accountability in an era of instant messaging given that the Commission had said it was not obliged to store text messages.The ombudswoman said consequential instant messages should be recognised as EU documents falling under transparency rules, recorded and made available for freedom of information requests.”The handling of this access to documents request leaves the regrettable impression of an EU institution that is not forthcoming on matters of significant public interest,” said the ombudswoman, Emily O’Reilly.”Public access to work-related text messages is a new area for the EU administration and one that needs to be tackled substantively and in good faith.”While raising public awareness and scrutiny, her recommendations are not binding and there is no penalty for falling short.