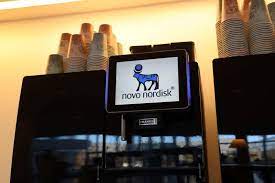 COPENHAGEN, Aug 4 (Reuters) – Novo Nordisk (NOVOb.CO) sought to soothe concerns about supplies of its new obesity drug Wegovy on Thursday, saying there was nothing unusual about a slight delay in its availability.Shares in the Danish diabetes and obesity drug maker fell by almost 10% on Wednesday, despite a significant upgrade to its financial outlook, with some analysts attributing the drop in part to lower-than-expected U.S. sales of Wegovy and a delay in when the drug is fully available later this year.Citi analysts said in a note that the share price fall was an overreaction to the news, while on Thursday Novo Nordisk Chief Executive Lars Fruergaard Jorgensen told reporters such a delay was not unusual.”We see that across our own facilities also from time to time,” Jorgensen added.Novo Nordisk was overwhelmed by demand for Wegovy after it was launched in the United States last year and the firm’s supply constraints were exacerbated when a contract manufacturer had to suspend production over manufacturing issues.On Wednesday it said it expected to make all dose strengths available to U.S. patients towards the end of this year, which was slightly later than its forecast in April for the second half of 2022.The huge potential of the market for obesity treatments would make a few months’ delay insignificant, Sydbank analyst Soren Lontoft Hansen said in a note.”We are very encouraged about the medium and long-term prospects about that, and we are not worried about short-term delay in supply,” Jorgensen said.Novo Nordisk’s decision to continue its SELECT trial, which studies cardiovascular benefits from Wegovy, also concerned some investors who had thought it could finish early if interim data had shown a large reduction in heart disease risk.”Base case all along was for us to continue the trial… We still think that we are on track to complete a successful trial with a very robust (cardiovascular) benefit,” Jorgensen said.Shares in Novo Nordisk traded up 0.3% at 0932 GMT.