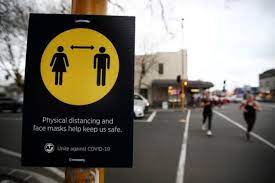 New Zealand had been virus-free and living without restrictions until Prime Minister Jacinda Ardern ordered a snap 3-day nationwide lockdown on Tuesday after a single case, suspected to be Delta, was found in the largest city Auckland.

Ardern on Wednesday confirmed the new case was the Delta variant and said there were now 5 confirmed cases in total, all linked to the original infection.One of the new cases is a fully vaccinated nurse from Auckland Hospital.

“We have always had our way of responding and it’s go hard and go early, because it’s much better than going light and long and ending up in prolonged lockdowns,” Ardern said in a video posted on Facebook.

The country will be in level 4 lockdown, the highest alert level, for at least three days, while Auckland will remain in lockdown for seven days.

In the capital Wellington few people ventured out in the city centre, which would normally be bustling with shoppers and office workers, while television footage showed similar scenes in Auckland.

Panic buying erupted after the lockdown announcement on Tuesday, with people stocking essentials at supermarkets despite repeated assurances from the government that there will be no shortage in supplies.

Finance Minister Grant Robertson said the government will reinstate a wage subsidy from Friday if the country is still in lockdown.

The last reported community case of COVID-19 in New Zealand was in February. Its citizens have been living without restrictions although international borders have largely remained closed.

The country has overall reported about 2,500 confirmed coronavirus cases and 26 related deaths.